On November 9, 2020, Pfizer and BioNTech announced that their vaccine was found to be more than 90% effective. In the meantime, other companies like Moderna, Johnson&Johnson, and Novavax made their own vaccines available. Furthermore, health authorities in different countries already approved some of the vaccines and many governments started their vaccination programs. Despite this good news, the situation in the real economy does not seem to improve. Governments shut down people’s hope with new restrictions and expanded lockdowns in many places. Adding to that, suppliers of the vaccine are not able to deliver the doses that are needed at the required pace. Considering the ongoing uncertainness, the question arises: when will people lose their patience? We already observed demonstrations and riots that arose from people’s frustrations of not being able to move and not having an outlook on when they can expect to return to normalcy. France for example does currently not have a strict lockdown but is fighting with the mutated versions of the virus. However, another lockdown will be deadly for many small enterprises. Germany’s government recently decided to expand its lockdown until March 7. Switzerland has a strict lockdown too and even introduced mandatory home-office wherever possible. New Zealand, one of the few countries that managed the coronavirus very well, introduced another three-day lockdown for their biggest city Auckland after discovering three new cases (a couple and their child). Austria on the other side ended their strict lockdown last Saturday and let non-essential shops reopen again. However, restaurants and bars stay closed. The government’s stimulus packages prevented the worst so far. Nevertheless, if you do not believe in the modern monetary theory, some when governments will run out of money too. One way or the other, this crisis will surely be expensive for generations to come.

On the other side, we see the rally at the stock markets going on. Despite the warnings of many economists and experienced investors, markets continue to rise further. Big tech companies that seem to lure people away from reasonable evaluation models lead the rally, just as we saw in 2000. To make matters worse, we see many young and inexperienced retail traders being swiped up in the frenzy, leading to events like the spike in companies like GameStop, AMC, and Blackberry. On top of that, we see ridiculous volatility in penny stocks and cryptocurrencies by people on the hunt for quick money. It looks like everybody is meant to be rich.

We find ourselves in front of equity markets that are explainable but in our perspective, not sustainable. The stock market seems to be fully detached from the real economy. When it comes to the development of the stock markets, it often is advisable to consult history. There are many crises we could look at, but for now, we will focus on the dot com bubble. When reading articles from that time, discussing the ongoing development you find many parallels to what is happening now. To give you an illustration you find an excerpt of an article published by Forbes in 1999 as follows (we encourage you to read the whole article, which you find here):

For day traders armed with Power E*trade accounts and limitless optimism, the Internet is a revolution that has blown away all the old rules about how the stock market works.

For more seasoned investors, however, the Internet rally looks suspiciously like a beast they’ve seen rear its head time and again in an overripe bull market: a stock market bubble, Fed by young, greedy investors for whom a 20% annual return on investments is a mark of defeat.

Currently, we can observe the same behavior by spending a day on Reddit or by observing the behavior of Robinhood traders. To be clear, not all of them show this behavior but there is a trend to find this kind of people on these platforms. In the American stock market, we can additionally observe how one initial public offering (IPO) follows the next. Many of those companies doubling their share price right on the very first day. The situation is quite different here in Europe. At the biggest stock exchange in Europe, which is in London, there were 34 IPOs during 2020 while in New York there were 480. At the biggest stock exchange in Germany, which is in Frankfurt, there were nine IPOs during 2020. Next to the number, the price developments of the newly issued stocks are not nearly as exciting as it is in the United States.

The reason why we are mentioning this is that we believe the steeper the rise the worse the fall. It is of course true that a crash at the American stock markets will have an impact on other markets too. Nevertheless, we believe that with reasonable investments in companies that do create value for their owners, a drop in stock prices will be way less harmful than an investment in a tech company that has not yet earned a dime.

Finally, we would like to share the so-called Buffet Indicator, which we find rather insightful. This indicator puts aggregated U.S. market value in relation to the current quarter annualized GDP estimate. Currently, this indicator shows a value of 228%, which is even higher as it was briefly before the dot com bubble burst. 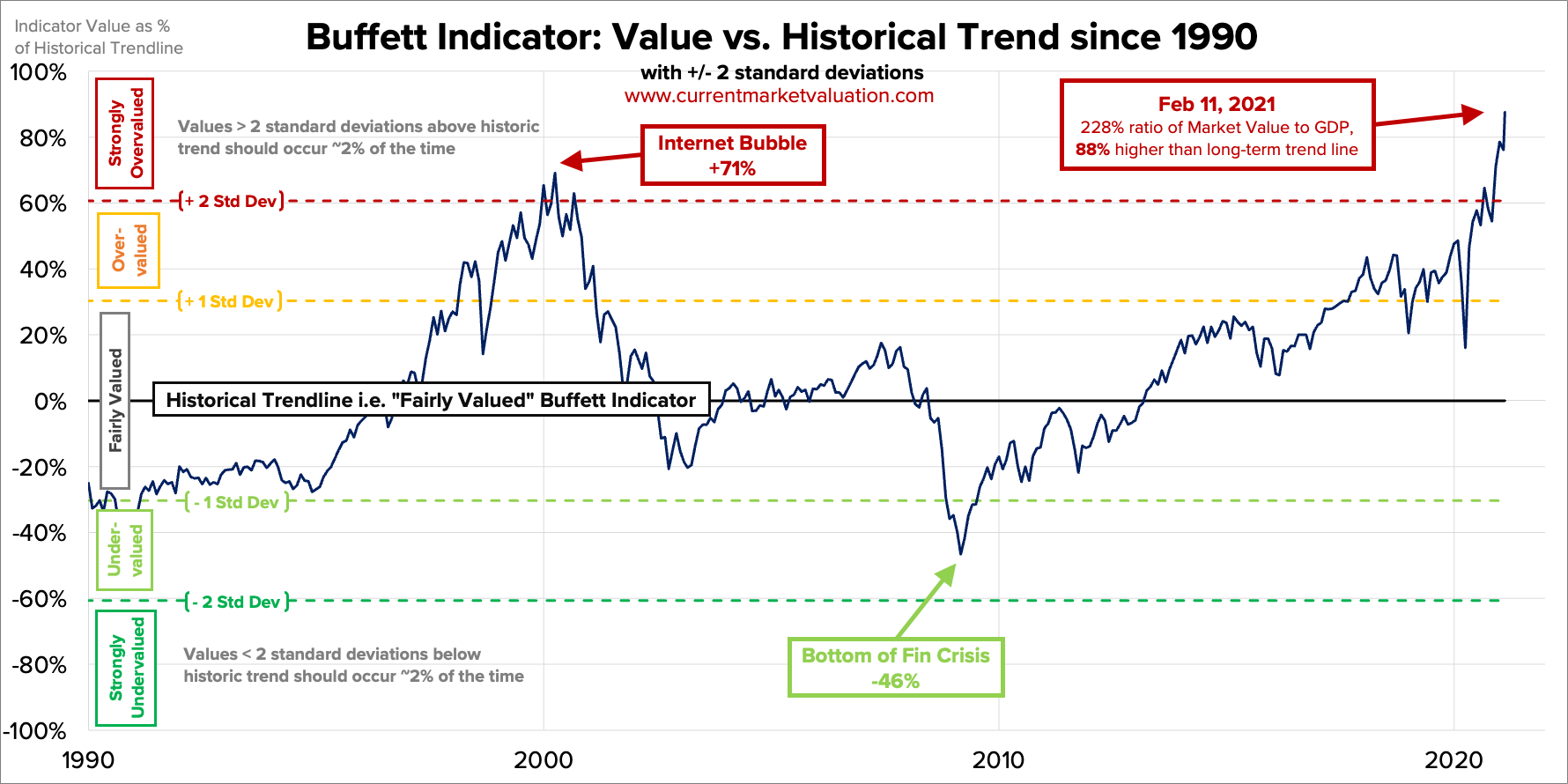 As you can see, there are quite some warning signs. In the current environment, it also makes sense to look at the signs coming from the central banks. There is a reason for the saying: “Never fight the Fed”. This is not only true for the Fed but also other powerful central banks in Europe and Asia. Additionally, to the Fed’s interference, we do also have the stimulus packages from the governments. All of that tells us that we have not reached the finish line in this game yet. Therefore, we believe staying in equities to a reduced extent still makes sense. However, be aware of the fact that the sentiment can change quickly and be ready once the time comes. This might be either with stop losses or with investing only in stocks that you feel comfortable to stay invested in even if they lose value in the short-term.

The bond markets have been highly difficult terrain for non-experts since 2008. However, in March 2020 the situation became almost nonsensical. In the developed world, you cannot find a central bank that still pays interest rates higher than 0.5%. Therefore, finding a fixed income investment in a stable country that is decently rated and leaves you with a positive return (after deducting expected inflation) is factually impossible. Even countries that in our perspective do represent a considerable risk show interest rates well below 1%. The latest example is Italy, where Mario Draghi (former president of the European Central Bank) became prime minister, which took the return for Italy’s 10-year government bond from 0.75% back to 0.45%. Putting this in relation to Italy’s debt-to-GDP ratio of about 135% as well as the many economic problems they are struggling with, this development is highly questionable. While quality bonds do not pay enough, investors have expanded their search into lower-quality bonds. This led to a considerable decrease in the actual returns of these bonds too.

What does that mean for investors? The theory teaches us that in a phase of an expected market expansion the quality of the bonds is not that important because money is easily accessible. However, in contracting markets the quality of bonds becomes important because leveraging the company’s balance sheet with debt becomes quite expensive. This seems to be logical. However, when examining the current situation, it becomes clear that the line of thought starts earlier when assessing whether the market outlook is positive or negative. While we see a reason to worry about the ongoing development of the economies and companies' balance sheets, other investors focus more on positive signs and therefore evaluate the markets differently. These days, however, there is another factor, which is distorting the fixed income markets. This is the expectation that central banks are going to buy bonds for any price to make sure markets do not collapse. However, even if we acknowledge that this is the case, we believe that this strategy is finite.

Precious metals have been unspectacular so far this year. There was one event, however, which attracted our attention. On February 1, the silver price soared up by 10% to over USD 29 per ounce. The reason for that development was rumors that Reddit investors found their interest in silver. When having a look in the respective discussion group, you will quickly find that this was not the case, or at least not to such an extent, that it would justify the extreme price movement. Forcing the silver price up is much more challenging than doing it with a stock that has a relatively low market capitalization. This insight made it clear that the price of silver will come back again, which eventually happened. However, since then the price of silver settled down between USD 26 per ounce and USD 27.5 per ounce. In the current situation, it is quite difficult to predict the price movement of precious metals for the coming months. With the expectation of a large stimulus package from the US government, the gold and silver price should get support due to new debt and therefore a weaker US dollar. However, the ongoing vaccination of the American population can put pressure on precious metals prices and intensify the investor’s interest in the stock market. Nevertheless, as we have stated numerous times, we believe that having a portion of your wealth in precious metals will be beneficial to you in the long-run since it serves as a hedge of the stock market in turbulent times.

Another interesting development is the price of platinum, which we rediscovered as a potential investment last year. The price of platinum broke through the chart technically important level of USD 1,050 per ounce and even went up to about USD 1,300 per ounce. As we predicted this development attracted quite some interest from new investor groups.

The commodity prices show strong recovery, as we have not seen it for quite a while. One impressive development is the price of copper, which reached highs last seen in 2013. We mentioned copper in our publication back in November when the price already reached almost USD 7,000 per ton. In the meantime, the commodity gained another 20%. Compared to 2013, the main difference is that we find the price in an upward trend rather than a downward trend. The Chinese infrastructure program that requires commodities mainly drives this development. However, should other countries decide to tread the same path, the development could proceed, which in the end would be quite beneficial for countries that are rich in commodities such as Australia. 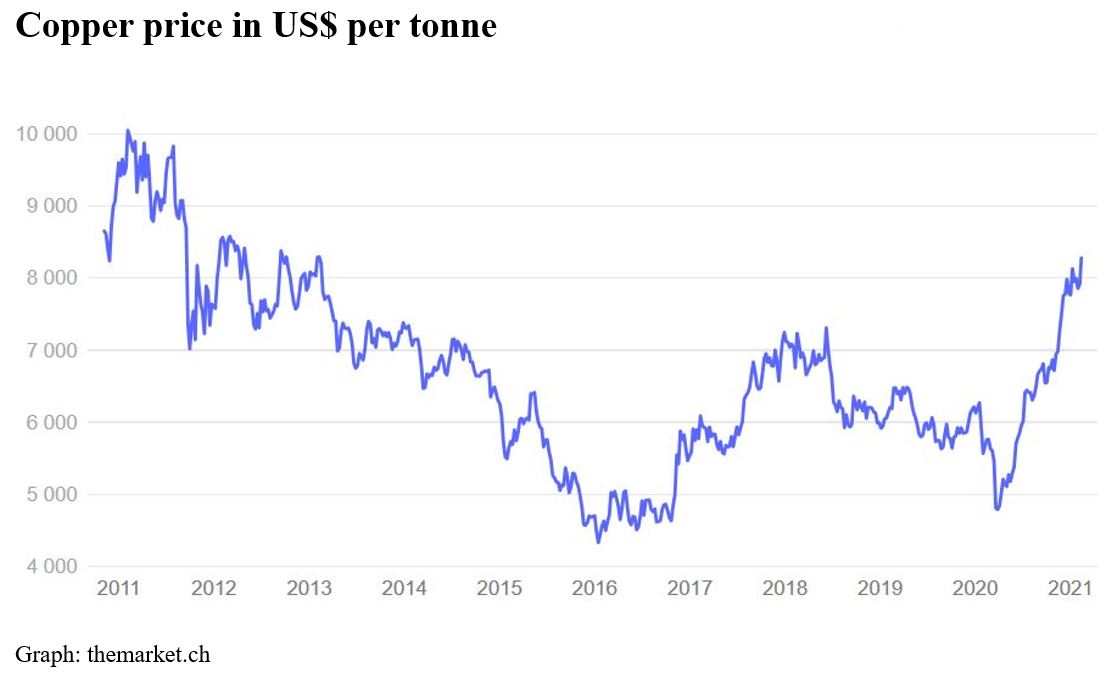 If you would like to discuss any of the above or if you have any question, comments or feedback, please do not hesitate to reach out to us: