Switzerland currently shows its qualities in many aspects. The International Monetary Fund praised Switzerland for how it traversed the economic implications of the current financial crisis. It was in part due to Switzerland’s drive to be Europe’s innovative epicenter; being able to hold this title through the pandemic has shown the fruits of this goal come to maturity. 2021 saw a wonderful display of the underdogs conquering giants, as Switzerland was able to defeat the current world cup champions of France in Fussball—or soccer for our American friends—in the European championship. It is a very big deal for the Swiss, as they will move on to the quarterfinals, an accomplishment not realized in nearly a century by the small Alpine nation. We hope this Friday will be another positive surprise as the national team is playing against a very strong Spain.

Despite all these pleasant pieces of news, the globe is facing a variety of challenges. While some countries are reopening their economies to tourists, others do not have this kind of opportunity yet or have even been forced to roll back their easing processes due to unchecked outbreaks. Regarding the newest mutation of the coronavirus, all eyes are on England, Portugal, and Spain. Despite the progress in vaccination efforts, it seems that the delta variant has spread quickly; it seems to be spreading through the young people, who are less likely to be vaccinated. A group of Spanish students traveling to the island Mallorca ended in 700 students being infected with the delta mutation. Portugal found itself, again, on the quarantine lists from England and Germany, forcing tourists to leave their holidays early. Accordingly, the situation for hotels, restaurants, and other tourism-related businesses continues to be unpredictable. Not all countries have a well-established strategy to help their tourist industry; this environment leads to a rising number of people living in poverty. Even worse, in the case of Spain, the government decided to spend the EUR 140 billion (USD 169 billion) received from the EU’s pandemic rescue package for purposes other than tourism, leaving the sector desolate.

In the Asia Pacific region, shocking news came from the current president of the Philippines, Rodrigo Duterte. His style of running the country has been questionable from a democratic perspective. However, his newest statement to jail those who refuse shots brings the world’s incomprehension of this leader to a new level.

Furthermore, China, which seemingly controlled the outbreak of the virus quite well last year, is experiencing outbreaks that require new measurements from the Chinese government. Next to the health issue, the latest outbreaks in Dongguan and Yantin also have an impact on the logistics of the global economy. Accordingly, closures and constraints are being placed on factories and ports, the numbers of ships waiting raised from 50 ships up to over 80 ships within a week. Some are voicing their concerns about how this can affect this year’s Christmas season by a shortage of requested products.

Despite economies still struggling and many uncertainties in places, most indices show a positive return of 10% year-to-date or higher. The latest event that led to a hit in the markets was triggered by the announcement after the Federal Open Market Committee (FOMC) meeting in mid-June. Investors were expecting reassurance through the Fed’s president, Jerome S. Powell, that everything would stay as it is. Surprisingly, their announcement indicated discussions about a tightening planned for late 2022 or during 2023 instead of 2024. Additionally, the possibility to discuss scaling back the USD 120 billion monthly spending program intensified the investors' reactions around the world. The result was a strengthening USD accompanied by a drop in stocks prices and precious metals.

However, the Fed is not the only central bank discussing when and how to end the ultra-low interest rates, and extreme spending programs will be conducted. For example, the European Central Bank (ECB) initiated the pandemic emergency purchase program (PEPP) in March 2020 for two years (until March 2022). The program contains a budget of EUR 1.85 trillion (about USD 2.2 trillion). Considering the improvement of economic figures, there are voices from EBC’s members requesting a discussion of whether scaling back, at least partially, makes sense before the estimated ending date.

The actual situation in Europe—especially in the eastern countries—is not as promising, and cutting the PEPP short seems unrealistic. There are further programs initiated next to PEPP. One of them is the NextGenerationEU program that contains a budget of about EUR 2 trillion to rebuild and modernize Europe from 2021 to 2027. It seems that all these programs are needed regarding the ongoing challenges faced in dealing with the new variants of the coronavirus. One of the biggest challenges in this regard is the rising income inequality that we saw during the corona pandemic. 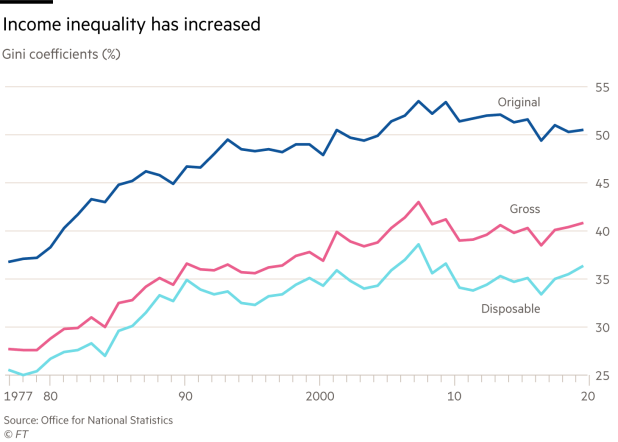 Other than that, on June 5, the G7 agreed to a two-pillar tax reform plan. Pillar one contains an assignment that countries where multinationals generate revenue, would be awarded new taxing rights on at least 20% of profit exceeding a 10% margin for the largest and most profitable firms. Under pillar two, they agreed to a minimum global corporation tax rate of 15%. While the announcement seemed to be an ultimatum, it will be another task to bring in enough governments to make the plan feasible. Additionally, soon after the announcement, there were talks about other countries that are willing to participate due to political pressures. However, it seems to be that countries will provide subsidies to the affected companies to keep the financial incentives for their economies. In the end, it seems as it will result in an environment where the government is more involved, but it will not have the desired impact after all. One issue is that countries will not abstain from higher taxes if they know that other countries will continue with the current financial incentives.

Observing the progress at the stock markets and comparing it to economic reality makes it challenging to justify the current high valuations. As we have seen recently, the reaction following the FOMC meeting shows that investors are aware of this situation. However, while the development of economic figures has been quite encouraging so far, we believe that there are several reasons to stay cautious. First, the markets are priced in quite a lot of the recovery already. Second, the pace will slow down as we see various announcements within different countries, for example, China or Japan. Third, many numbers are shown relative to the results from 2020. Since the second quarter was the toughest in 2020, the relative results in the months April to June were quite impressive. Accordingly, we are not convinced that the current optimism will last forever. However, companies will be reporting their first-quarter results at the end of July and in August. The likely positive results from the first semester accompanied by up-to-date economic numbers might lead to mixed signals confronting investors in the coming months. Finally, many numbers are distorted since the circumstances of collecting actual figures are different due to the corona crisis. One example is the unemployment rate that might show lower figures but is also affected by the fact that many people are currently not looking for a job. The reasons for that are different and currently unclear. Some people are frustrated and gave up for the time being to look for a job, especially in the tourist industry. Other people are currently satisfied with the unemployment benefits and other financial support they receive and do not see a reason to look for a job right away.

Despite the latest announcements of the FOMC and other central banks, we believe that there will be no actions any time soon. In our perspective, the announcements have more of a symbolic character and give the leaders of the monetary policies some wiggle room to react should the optimism fade away. So far, they have been moving at full steam, and there was almost no buffer available to react to another downturn in the markets. Additionally, the environment was advantageous to take a step away from the modern monetary theory to test how the markets would react. We believe that the first reaction was too harsh and that the tensions it caused will ease soon. However, investors are already thinking of the next FOMC meeting in August. Since the recent one brought some surprises, investors will be cautious when positioning for the next one.

Accordingly, we see reasons to believe that there will be ongoing insecurities in the markets, which might lead to higher volatility in the months ahead. We believe that having a focus on strong countries as Switzerland with its safe-haven currency is a great place to diversify investments these days.

Choosing the right currency is essential when making long-term investments globally. While it is quite difficult to make gains with currencies in the short term, with some currencies, there are long-term trends that can be observed. Within these trends, there is volatility, which includes counter-movements. Staying with the focus on the Swiss franc, we believe that the USD/CHF is still in a downward trend. This trend has started in 2001 and found its low in 2011. Since then, there has been a stable period where the USD/CHF moved between 1.05 USD/CHF and 0.9 USD/CHF. While the USD seems to find support somewhere around 0.88 USD/CHF, the chances are that it eventually will breakthrough.

Investments in foreign currencies are also beneficial to protect your wealth against a decreasing purchasing power, i.e., inflation. The graph below published by Shadow Stats shows impressively how an investment in the Swiss Franc helps to keep someone’s purchasing power in USD. 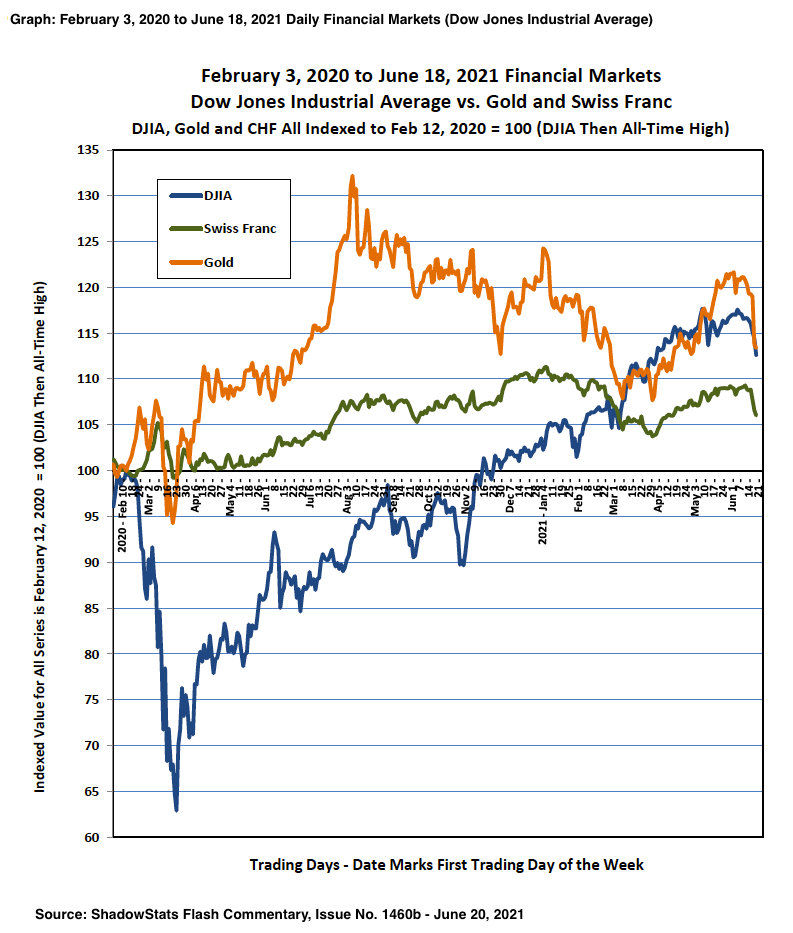 A specific measure we look at is the US Dollar index (DXY). This index measures the value of the USD against a basket containing six currencies (EUR; JPY; GBP; CAD; SEK; CHF). A high value of the index implies a strong USD. Currently, the DXY trades around 92 and has support around 89. However, the USD gained strength back in 2014 when it came from a level of about 80. Considering the current inflation expectations in the US and the ongoing spending programs, the chances are that the USD will lose value within the next years. Accordingly, the current level in the USD index could offer an opportunity to diversify globally, benefitting from stable currencies.

There are not many changes in the fixed income area. Qualitative bonds are still expensive. The lack of quality became visible after the FOMC meeting when the ten-year treasuries experienced a short sell-off on June 18. However, this development was used by investors to buy these treasuries at attractive prices, which lead to a decreasing return back to where it was before the meeting took place. Should there be more signs during the weeks ahead that indicate that the Fed will start to reduce their spending program maybe even at the end of this year already, another sell-off in treasuries is likely, bringing the return back up. This would result in decreasing prices for corporate bonds in general, which could be an opportunity to find attractive investment opportunities again.

Investors having gold, silver, and mining companies in their portfolios saw the reactions to the FOMC meeting as hurtful. However, as shown in the graph above, when talking about preserving purchasing power, investors should not worry too much about short-term volatility. Gold in particular serves as a long-term investment and stabilizer to a portfolio. Since there are ongoing concerns that inflation will rise further, the interest in gold, silver, and other metals should stay intact. Regarding the mining companies, they are undervalued. While they are quite volatile, we consider the downside risk to be lower than the upside potential. A positive note regarding the mining companies is that they have learned from their past and have good risk and cash management strategies in place. Accordingly, some mining companies began paying dividends again last year. At the current price levels of precious metals, news about rising dividends and share buybacks are possible and would likely be well received from investors.