“The dollar is our currency, but it is your problem.” John Connally

While we shared the newest development about the European Championship in Soccer at the beginning of July, we are happy to share the Olympic Games results this time. Switzerland, after almost 70 years won 13 medals at the Summer Olympic Games in Japan (in 1952, Switzerland won 14 medals). Furthermore, in the discipline of mountain biking, the Swiss women won all three medals.

By the way, Switzerland did not win the European Championship in Soccer but failed to win the quarterfinals against Spain. While it was painful for us, the performance of the Swiss national team was worth seeing after all.

In Afghanistan, the departure of U.S. and NATO troops lead to a power vacuum, which the Taliban now successfully used to capture most of Afghanistan including Kabul. In the meantime, Afghanistan's current president Ashraf Ghani fled after asking for help to protect Afghanistan's capital. As a result, Switzerland is in the process of departing its development aid worker from Afghanistan. Additionally, the Swiss government plans to grant Afghani employees and their families a humanitarian visa.

The Taliban’s capture of Afghanistan is just one event that shows the rising instability that the world currently faces. The Swiss Federal Intelligence Service discussed in its latest situation report the current global sentiment that contains a lot of instability, which eventually has the potential to result in wars. This leads to a situation where Switzerland will be eager to promote its neutrality and its experience and benefit as a mediator.

We are already in the middle of the third quarter of 2021. While the corona fatigue probably has arrived in every household, concerns about this fall are still present. Since many governments promised to ease the measurements once a certain part of the population is vaccinated, they eventually have to stand by their promise. Some regions have opened up already, which has worked just fine so far. Currently, the most famous example is Great Britain, where Boris Johnson announced the “Freedom Day” on July 19, where he removed almost all restrictions. The concerns of rising coronavirus cases did not materialize yet. While some are saying that the numbers are not accurate due to fewer testing, the fact is that the health industry is well able to deal with the patients who need medical care. This kind of individual responsibility is likely to be used by other countries in Europe too. With reopening economies and the adaption of companies to the “new normal”, people can spend their money again. However, since there are differences between the countries, shortages can arise, which can lead to higher prices. While inflation seemed to be a theoretical construct for a long time, people are worried about where it will lead. As a representative of that concern, the newest data show that consumer sentiment in the U.S. plunged to the lowest since 2011 (see figure below). 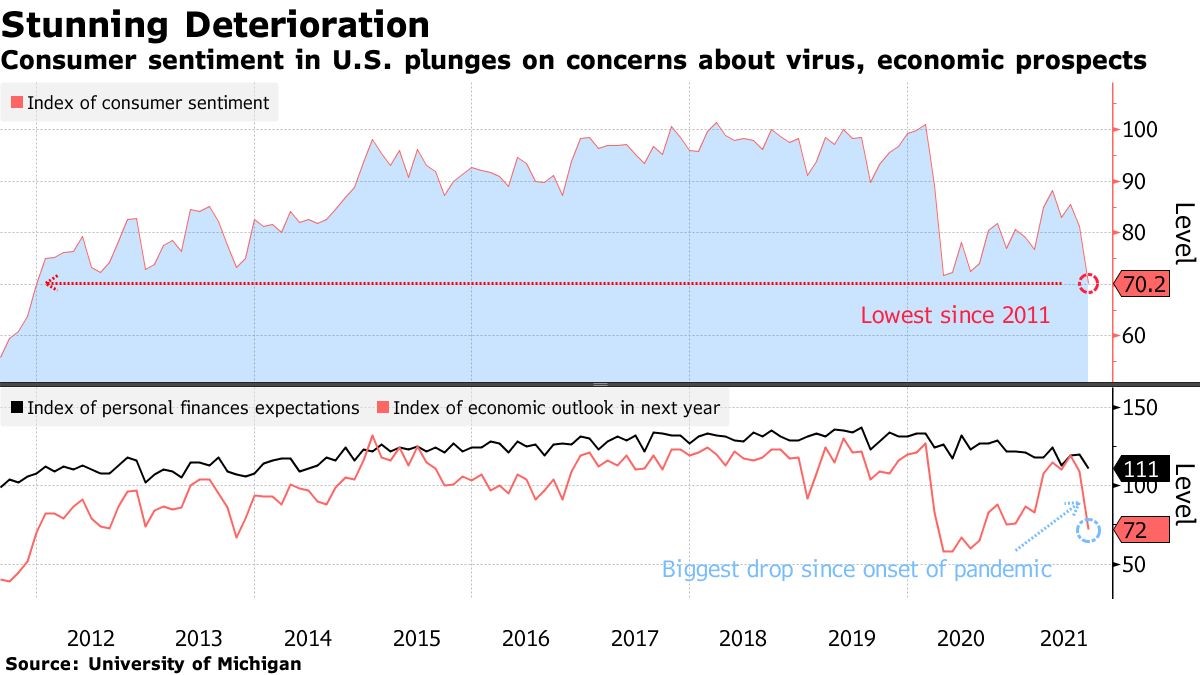 Despite the worries about the Delta variant, it seems that, broadly, markets move independently. However, following the reporting period, many companies were able to present results that are even in line with the expectation at the beginning of 2020 before COVID-19. Accordingly, over 50% of all companies listed on the S&P 500 and the STOXX Europe 600 received a buy recommendation. 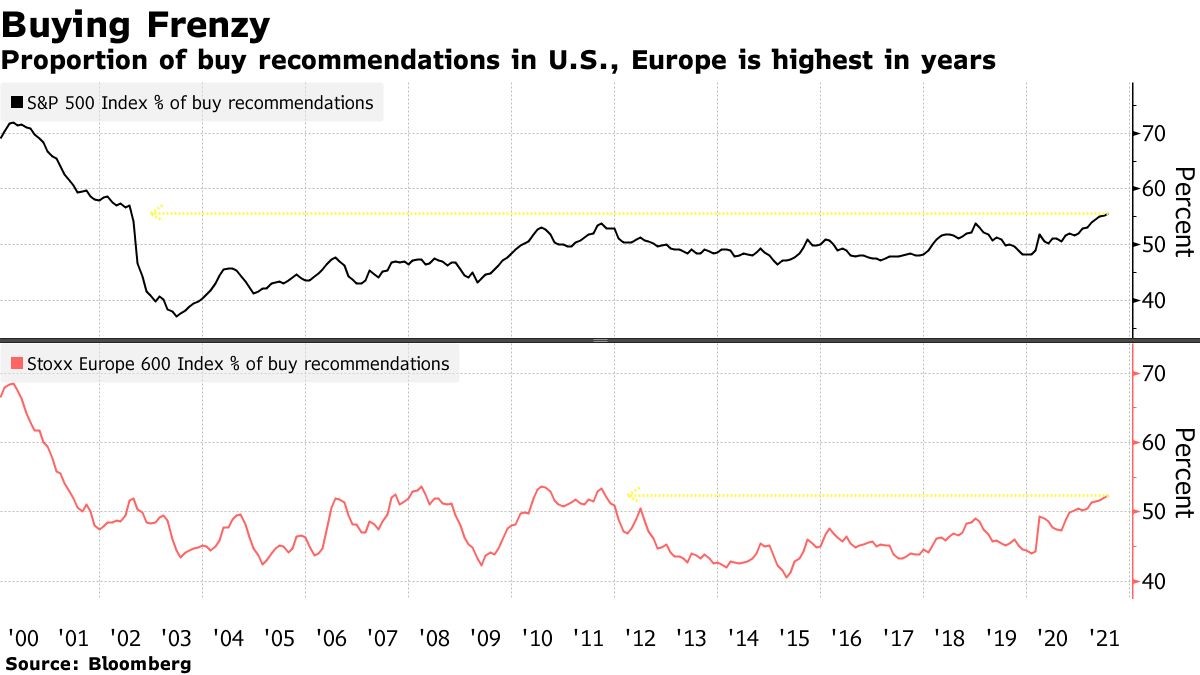 However, not all industries are that lucky, talking in particular about travel and leisure. There, you will find companies that have changed into sideways movement with some tendency of a downward motion. They still trade considerably below their highs reached right before the pandemic measurements hit the economy. Accordingly, quite some potential remains should the borders open again, and tourism becomes broadly possible.

As a reference, international tourism in EU tourist accommodation was down by 68 % in 2020 compared with 2019. While there was some hope for 2021, we still see many challenges coming with traveling, including testing requirements despite being fully vaccinated. Numbers from the first quarter of 2021, where many restrictions were still in place, show for the EU tourist accommodation a minus of 73 % compared to the first three months in 2020. 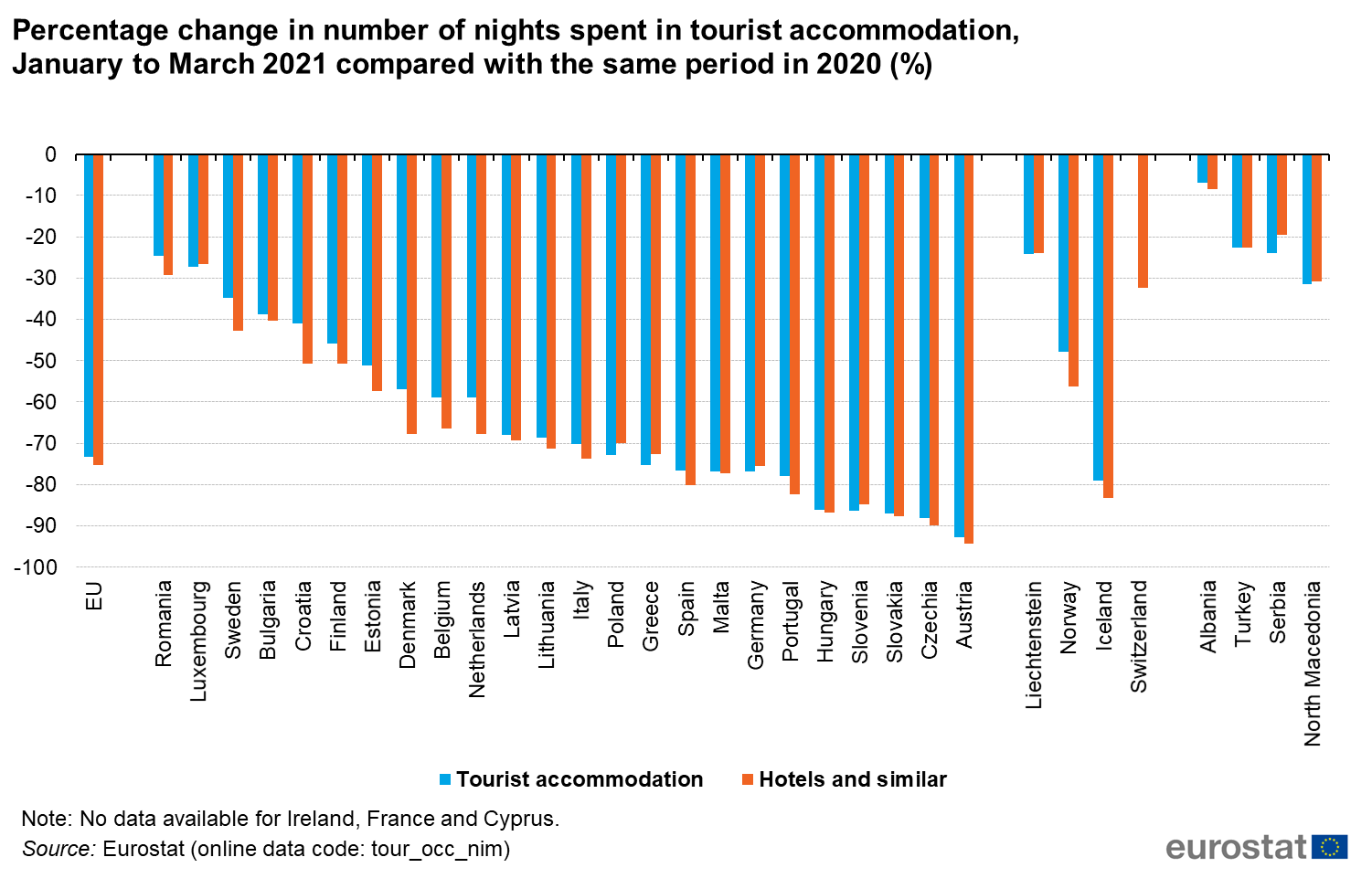 Especially in the previous week, there was a big rally in equities showing that there is still money available or made available to invest. Our primary concern about this development, which we are following closely, is the experience we had last year. While summer months usually allow better movement without a vast spread of the virus, the experience was a high spike in new corona cases once the weather became cold again in the Northern hemisphere. While the markets will likely react to the number of new cases, the question will be whether such a development would result in stricter measurements by governments. Again, we believe that the degree of capacity utilization at the hospitals will be crucial for the governments to decide. Bringing it to the point, should a potential increase in coronavirus cases not result in new measurements, corrections at the markets might represent an opportunity to add new investments to the portfolio. On the other hand, there is much dip-buying power. According to Bloomberg, the last time the S&P 500 Index saw a peak to trough decline of 5 % or more was 195 days ago, about twice the long-term average.

Fifty years ago, in August 1971, Nixon and his economic advisors decided at Camp David to walk away from the Bretton Woods system (which included the gold standard). This so-called Nixon shock was the basis that made the national banks' money printing we are currently experiencing possible. The Bretton Woods system contained two elements:

However, one goal of walking away from the Bretton Woods system was to weaken the USD so that the U.S. economy will become more competitive. Thus, while Nixon urged other countries to appreciate their currency, the Fed inflated the USD. An impressive example of where this leads to is the USD/CHF exchange rate. The USD depreciated from 4.2954 Swiss Franc per USD in 1971 to 0.9152 Swiss Franc per USD in 2021. That is a depreciation of about 79 % so far, considering the potential ongoing depreciation due to the current money printing in the U.S. 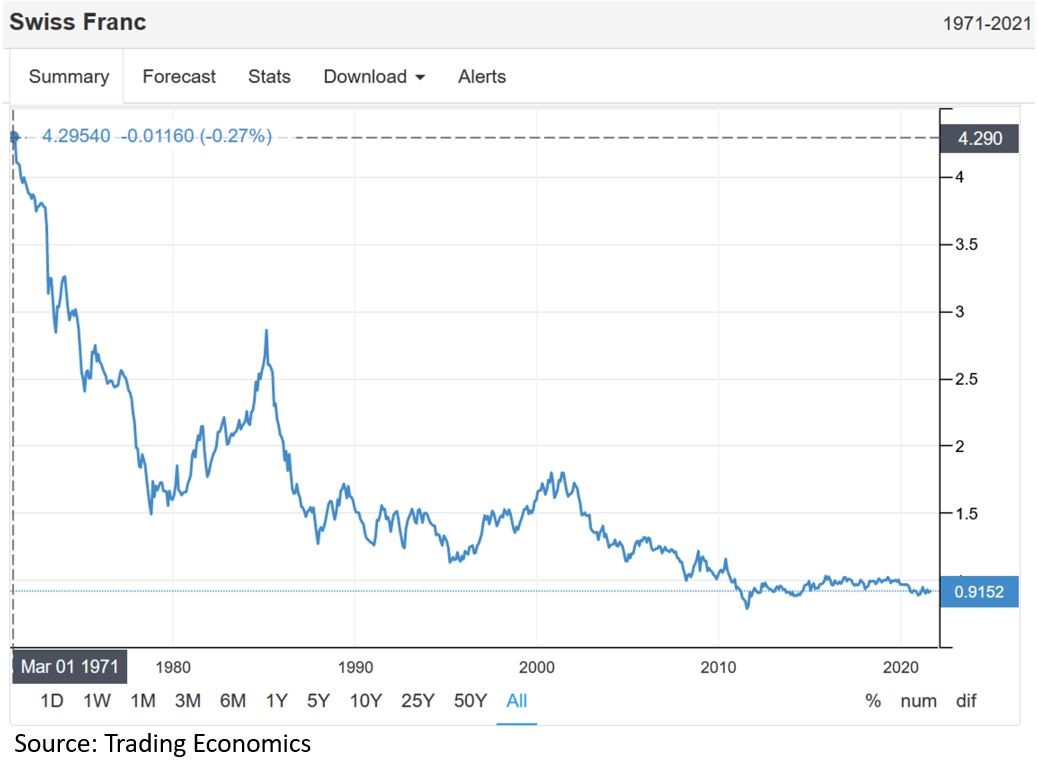 In general, the abandonment of the Bretton Woods system led to the highest inflation rate in the USA, resulting in interest rates rising to nearly 20 %. In the current environment, the risk of increasing inflation is present in people’s minds. Looking at the inflation development in the Eurozone, we see the clearest spike in energy prices that deked a rest followed by an ongoing price increase.

From our perspective, it is unbelievable how shamelessly Elon Musk manipulates the crypto market and gets away with it. He pushed the price of Bitcoin up when he moved a good part of Tesla’s balance sheet into Bitcoin and then shortly after announced that Tesla would no longer accept Bitcoin as a payment method because of environmental concerns. A couple of weeks ago, he mentioned that Tesla might be going back to accepting Bitcoin while nothing changed regarding the ecological impact of crypto mining. Nevertheless, the expectation of Tesla accepting Bitcoin as a means of payment again gave Bitcoin another boost.

Other than that, the most significant cryptocurrency theft became public, where cryptocurrencies worth USD 600 million were stolen from the PolyNetwork. Surprisingly, the thieves returned half of these assets in the aftermath. However, that is not something I would bet on in the future. Having said that, the other half is still missing.

Whether cryptocurrencies are here to take over a more significant part of the payment and investment environment is still to be seen. However, the recent development in this area shows that regulation will likely be rolled out sooner rather than later to protect the abuse of cryptocurrencies.

The further development of fixed-income investments depends on the further development of inflation numbers and the behavior of central banks. Fixed income would become even more unattractive should inflation further rise without seeing central banks taking any measurements. The reason is that with the current interest rates available on a fixed income investment, inflation can eat away the gains and leave you as an investor with a negative yield after all. By acquiring fixed-income investments in other currencies, this risk can be reduced. However, even in this case, it is challenging to find investment opportunities. Moreover, the risk return is mostly unattractive since the contingency risk might be too high for the returns you get. This is, among other reasons, an essential explanation for the ever-rising stock prices.

Especially government bonds seem risky these days. This finding, however, seems not to plunge investors. Italy, for example, with a debt-to-GDP ratio of an estimated 155 %, canceled last week’s debt auction because the government is flushed with cash. Accordingly, Italy’s 10-year yield fell to as little as 0.55%. According to Bloomberg, the main reason for that development lies in a combination of the European Central Bank’s unprecedented stimulus paired with investors looking out for the highest-yielding corners of the market.

Due to concerns about the Delta variant, especially in Asia, the oil price corrected after increasing almost 40 % this year. The most significant risk to oil and commodity prices are new lockdowns that might result in another slowdown of economic growth. A recent outbreak of coronavirus in New South Wales, Australia, lead to a new strict lockdown beginning at 5 pm on Saturday, August 14, for the following seven days at least. This includes a 5km radius travel limit. Other than that, China enacted a partial closure of one of China’s biggest cargo ports due to Corona. This kind of development decelerates the movement of people and the supply of materials, which eventually has an impact on commodities as well. With fewer cars driving and ships moving, there will be less demand for oil in particular, which can result in an excess supply that drives down prices.

On Monday, August 9, we experienced a flash crash in precious metals, where gold, silver, platinum, and palladium corrected quite a bit before recovering afterward. While the reason for that was a combination of technical factors and poor liquidity, the trigger has been the better than expected recovery of the U.S. economy. The following weeks and months will be crucial for the further development of the precious metals prices. Should the central banks start to slow down their spending programs, precious metals prices, particularly gold, could suffer further. Especially this week’s speech of Jerome Powell will give important insights about what to expect from the Fed regarding their spending program. 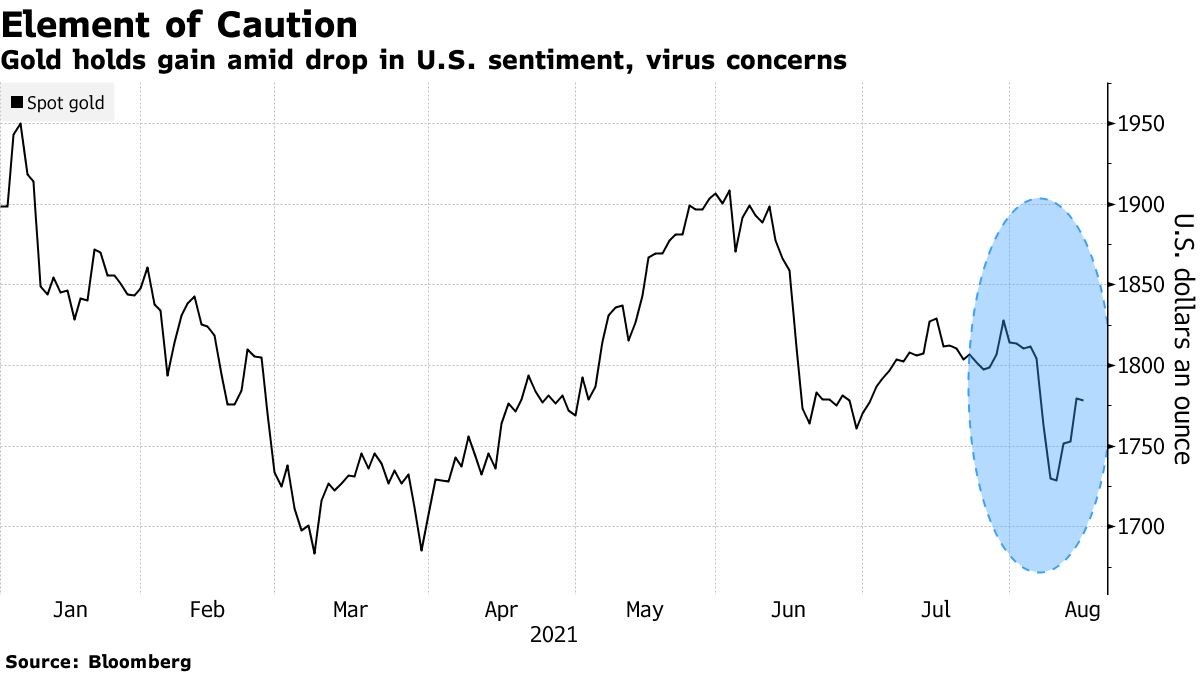 The question in this regard is whether precious metals are a short-term or long-term investment in your portfolio. Dependent on this outcome, corrections like the flash crash from last week are either a buying opportunity or a reason to rethink the exposure in precious metals. From a long-term perspective and taking into account that 50 years ago, when the Bretton Woods system was still in place, the gold price paid by the Fed was USD 35, there is a point holding a certain amount in gold. In absolute terms, that would have resulted in an average performance of about 8.2 % every year. However, keep in mind that this figure is not inflation-adjusted.