Land in sight… the huge steamship stayed the course and moved through the storm, the waves have calmed down and now there is land in sight. So far so good. However, unluckily we do not know what is waiting for us once the ship connects with the land and we step foot on it…

When it comes to the vaccination rollout and the measurements against the virus there are still differences between the countries but they slowly disappear. While Great Britain is raising the limit of people who can travel with the famous English double-decker again and opens its pubs, other countries are still reluctant when it comes to easing their lockdown measurements. Switzerland opened the outside areas of restaurants a couple of weeks ago and recently informed that by the end of this month restaurants can open fully. On the other hand, the situation in India has become fatally worse. Even worse than what happened in Italy last year when the virus arrived in Europe. Speaking of, Italy’s Prime Minister Mario Draghi (the former president of the European Central Bank) recently announced that he voluntarily waives his salary. With a salary of EUR 115,000 annually it is more a token gesture but it shows how serious he intends to help his home country come out of its economic crisis. European countries are currently looking for solutions to allow summer tourism, which would of course help Italy too. Germany changed their rules so that people who are vaccinated or have recovered from the virus do not have to quarantine anymore, with the only exception being if they are coming from a region where mutations exist. Also for the remaining travelers, the restrictions were eased. Currently, there are several discussions on a national and international level about a corona passport. Such a solution might contribute to a fast opening process, but governments should be careful that they do not provoke social unrest through a two-class society. We have already seen that happening in some countries when dusk-to-dawn curfews were introduced.

While these developments represent a lag to what is happening in America it gives us an indication of what to expect as investors. As we could see, the markets in America had quite a good start into 2021. However, at the American markets, a lot is already priced in and investors become nervous about the future and are discordant about the potential. The situation in Europe is quite different. The markets still suffer from the restrictions and since there have been so many setbacks in the last year, investors are still cautious. While we were cautious too, we feel that the steps towards opening the economies will bring huge relief for many companies and the employment market too.

The nervousness at the markets is quite intense again. A lot of it coheres with concerns about a higher than expected inflation and setbacks when it comes to the virus because of mutations. When Janet Yellen mentioned that the Fed might respond to an overheating economy by moderately raising interest rates, the market’s reaction was a prompt selloff. In our perspective that was a clear sign of how nervous the investment environment is. Nevertheless, analysts seem not to care about the overall picture. Their expectations are huge which leads to a situation where companies get punished for results that are not that bad. Thus, investing becomes even harder because even with a solid company you can get caught on the wrong foot. Furthermore, it is important that everyone does his research and does not act on price movements alone. Nonetheless, never underestimate the power of the market. Should you own an investment in which you believe in but the price keeps falling there should be an ultimate price level where you materialize the loss. Eventually, people are less stressed out knowing they have lost 50% of their investment than keeping such an investment in the portfolio and wondering whether the price will fall until the loss will be 90%.

As mentioned above, we believe that European markets should be favored over US markets. While the MSCI US stands around 50% above its long-time average, the MSCI Europe is 15% above its long-time average. In our perspective, this development is not a short-term play but has the potential for a sustainable change. The biggest risks we see for the American market are the various expensive programs that might result in higher taxes for companies and maybe even wealthy Americans. Furthermore, the tech companies were the main contributor to the US markets in the last decade. The Biden administration however might bring on regulatory requirements that have the potential to lower the gains. Not only the US government has a problem with the market power of these companies but the European regulators too. On the other hand, due to the lower expectations in Europe, the possibility to surprise positively is higher than in America where the expectations are already very high. 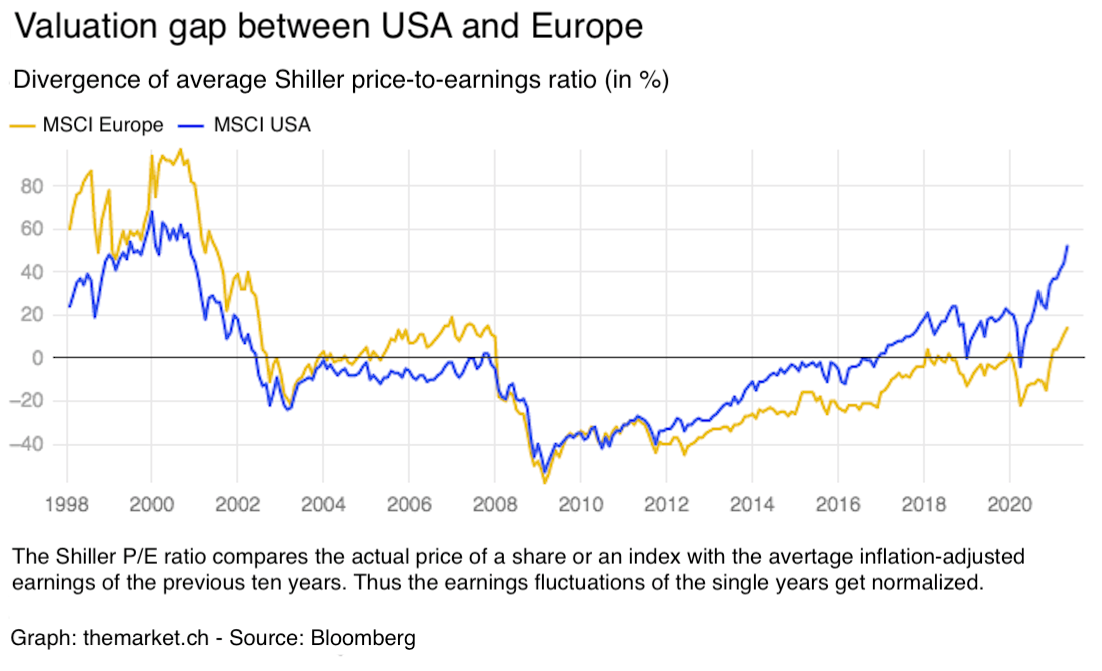 Other than the geographic allocation we feel that value investments are in a good position to return to their old glory. A sign that confirms our view is the fact that the investment company of Cathie Wood with the ARK innovation ETF is down about 18% year-to-date while Warren Buffets company Berkshire Hathaway shows a performance of over 20% in the same period. While the return of value investments is slow the chances are good that it will be sustainable. Our belief in value investments does support our belief in Europe too. According to an analysis of HSBC, the share in value titles is above average in Europe. Additionally, should the interest rates eventually rise, the value should profit too. The reason is that value companies have the cash flow generated through sales closer to today as is the case with growth companies. Accordingly, since the turnover must be discounted over time, rising interest rates hurt the evaluation of the growth companies' share prices. This was the reason why Yellen’s statement about rising interest rates resulted in such a strong sell-off.

On May 5, the IMF’s Currency Composition of Official Foreign Exchange Reserves (COFER) released the results of their survey which found that the share of US dollar reserves held by central banks fell to 59 percent — its lowest level in 25 years — during the fourth quarter of 2020. While it is still an impressive number it shows the tendency. However, the recent weakness of the USD that followed the interim strength in the first quarter might be challenged during this year several times due to the insecurity at the markets. As a correction at the markets cannot be ruled out, this would likely bring some strength in the USD back. 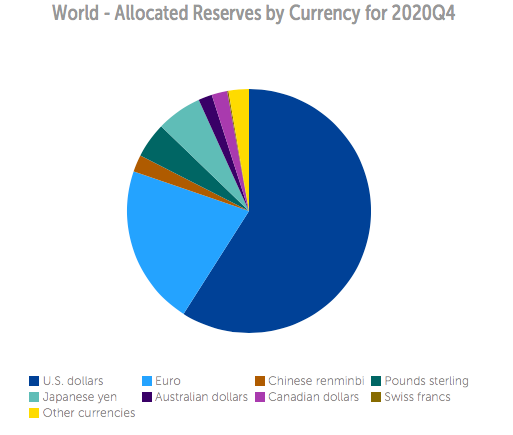 Nevertheless, the development of the exchange rates since last March shows that other currencies offer an interesting investment by themselves. In our perspective, these are the Pounds sterling and the Australian dollar in particular. While the Australian dollar has already gained quite a lot, and ongoing strength in commodity demand will further support the Australian dollar against the USD. While Great Britain is still struggling with the consequences of Brexit, we are confident that in the long run they will find their spot in the world order and will return to strength. While the Pounds sterling in the meanwhile is a shadow of its former self, we feel that the country has potential to grow which will bring up the value of their currency too.

While many dislike the Euro the share of Euro reserves held by central banks lies around 21%. However, that is not a guarantee that the Euro will keep up its value and we see a risk for the Euro to lose value this year. The reason is the Bundestag elections in Germany where Chancellor Angela Merkel will be succeeded after 16 years. Depending on who will be the new chancellor and how the government will look like afterward it can have quite an impact on the Euro. Germany by far is the biggest country of the European Union when it comes to their GDP. Accordingly, their policy has an impact on the Euro used by most countries in the European Union.

With higher volatility at the stock markets, the cryptocurrency volatility was even higher. The main influencer in the crypto world is currently, without a doubt, Elon Musk. After he made a significant contribution to the rise of Bitcoin by accepting it for payment and invested a considerable part of Tesla’s cash into it, he recently announced that Tesla would no longer accept Bitcoin for payment for their cars. In the meantime, he boosted Dogecoin, a satirical cryptocurrency invented to show the craziness of the crypto hype, over Twitter. This led to a Dogecoin price rally from USD 0.05 to USD 0.72.

This shows impressively how important it is to be aware of the risks and volatilities in this investment class. Blindly following other investors and throwing money into something like Dogecoin can be very costly.

The rally in commodity prices is difficult to assess. While some experts as the ones at Goldman Sachs are sure that another supercycle began, there are concerns that the current rally lacks the compelling structural demand story that drove previous supercycles. 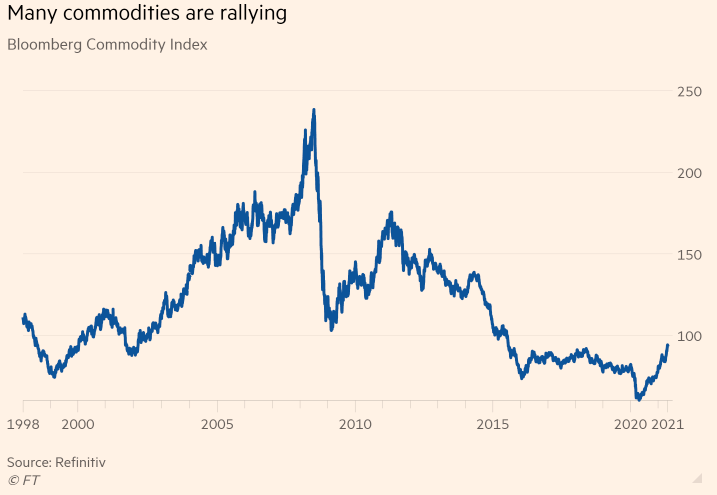 However, when having a look at the commodity index, the potential seems huge. Considering the stimulus packages not only in America but also in Europe and other regions around the world, there is reason to believe that the rally can continue. According to the financial times, a commodity supercycle lasts somewhere between 10 and 35 years. Whether we will see the commodity prices going as high as was the case in 2008 is questionable. Our major counterargument is the change into sustainable, environmentally friendly projects. Nevertheless, science is not able yet to provide solutions to forgo commodities completely. Accordingly, there is a fair chance that we will also see rising demand for commodities such as oil which is not very popular anymore.

After a weak first quarter, precious metals were eventually able to regain some strength. Accordingly, the gold price moved back above USD 1,800 per ounce and the silver price to over USD 28 per ounce. However, whether we are back on track is still uncertain in our perspective. We believe that we generally have seen the lows so far but are aware that in a correction or another crash for whatever reason, gold could fall below USD 1,700 and silver below USD 25 per ounce again. Nonetheless, we see further potential and will use such events as an opportunity to increase the exposure in portfolios where appropriate.

Regarding our rediscovered precious metal platinum, we see the demand for platinum rising within the future and accordingly are watching this metal closely. However, we believe that patience is important when investing. We see a buying opportunity at prices below USD 1,200 per ounce. The reason for our positive view is the shift into sustainable energy and technologies where we are convinced that the platinum mines and the recycling industry are not set up yet to cover the demand properly. However, with prices moving towards levels we have seen back in 2011, the efforts to provide platinum will increase which will be a crucial moment for investors where they must decide whether they stay invested or realize the gains. Yet, this is a discussion for another day.