We are happy and proud to announce that we are celebrating WHVP’s 30th anniversary this month! In October 1991, our founder, Robert Vrijhof, headed into this journey with his two business partners, Hans Weber and Adrian Hartmann. We pride ourselves that we are the one and only asset manager in Switzerland focusing on U.S. clients since the early 90ies. Especially after the great financial crisis, when many financial providers stopped working with U.S. clients, we never refused to do the work to provide a compliant solution for U.S. persons to have access to European private banks. With the recent generational succession that took place, we know that we are set up well to master the next three decades of WHVP.

While July and August are calm due to the summer holidays, September made more than up for it. While stock markets corrected last month, France's President Emmanuel Macron showed his frustration about Australia's decision to cancel their order for their submarine and team up with the U.S. and Great Britain instead. The decision of changing partners for this project is based on a strategic alliance to make a point that the ongoing provocation from China in the indo-pacific area is taken seriously and will not be accepted. Furthermore, Germany had their long-awaited election called "Bundestagswahlen." This election leads to new allocations of the different parties in the parliament ("Bundestag"). In the following weeks or even months, the parties have to arrange themselves and build alliances so that eventually, they can choose and elect the successor of Angela Merkel. The Social Democratic party, led by Olaf Scholz, won the most seats with 25.7% (206 seats of 735). Close after the Christian Democratic Union, led by Armin Laschet, reached 24.1% (196 seats of 735). Due to the close results and the possible alliances, it is still unclear who eventually becomes the new chancellor. Great Britain itself currently struggles with too few HGV truck drivers which led to a fuel crisis. Even though enough fuel is available, it does not make it to the gas stations. The announcement of B.P. that it would have to "temporarily" close a handful of gas stations led to this "gas station run." The government reacted to this issue by making 150 qualified military drivers available and having another 150 personnel ready to support them.

After observing one high after another at the stock markets, the indices broadly turned red in September. How severe this correction will become is still unsure. Amongst others, the insecurity comes from mainland China, where the property behemoth Evergrande became incapable of making interest payments on their outstanding bonds. However, the tremendous amount of debt carried by Evergrande was nothing new. While the risk of the collapse of Evergrande is not comparable with the Lehman crisis back in 2008, according to different experts in this field, there are threats that, due to the current development, other countries will be affected by as well. Australia in particular is at risk of losing part of their commodity delivery, especially iron-ore, because of unrealized property projects. 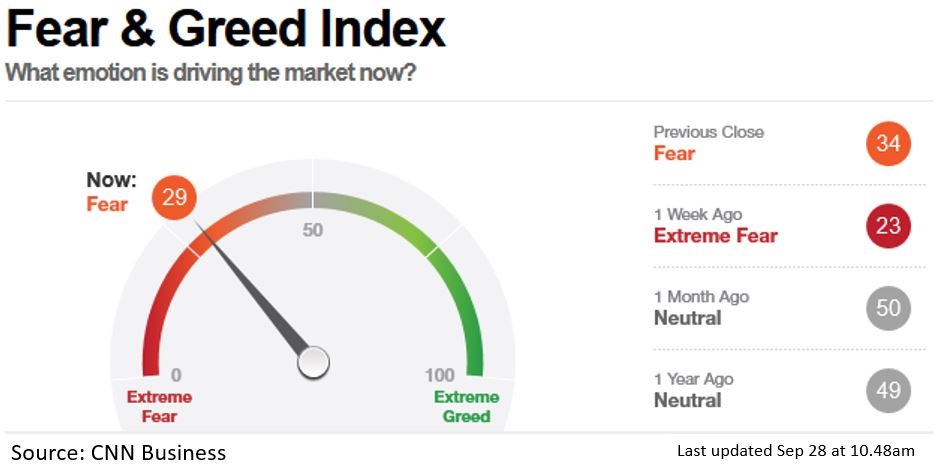 Furthermore, there is increasing insecurity resulting from inflation rates well above the targeted 2%. In the euro area, for September, there is an expected inflation rate of about 3.3%. According to Citigroup, most investors harbor fears of persistently high inflation, with a 20% pullback in stocks seen as more likely than a 20% rally, Bloomberg states. Furthermore, Jerome Powell recently admitted that inflation might be more persistent than initially thought in front of the senate. Accordingly, the consumer price index was up 5.3% on a year-on-year basis back in August. While Jerome Powell ensured that the central bank has the instruments to react appropriately to persistent inflation, the question remains whether this is true. Central banks, particularly the Fed and the ECB, find themselves in a trap. In case of higher inflation, they can reduce their stimulus spending and eventually raise interest rates. However, if prices rise due to structural unemployment and a lack of products, there is not much a central bank can do.

Additionally, central banks are very limited regarding rising interest rates due to the incomparable high debt. We find ourselves in a world where the overall debt of private households, governments, and companies (without financial institutes) adds up to about 270% of global GDP. We do not believe that this is a sustainable way to grow the global economy.

Indices lost about 5% to 8% in September. While the correction was long overdue, the question remains whether it was a hiccup or the beginning of a more severe drop. There is reasoning for both sides. However, the current risks are numerous; tapering, inflation, the looming collapse of Evergrande, and a potential U.S. government shutdown as well as a debt default. We believe that we are entering into an environment of a weakening cyclical trend. Especially the more persistent inflation will finally reach the companies and put pressure on their earnings.

Additionally, once central banks start to lower their spending, liquidity will get out of the system, which in our perspective will alienate investors. The last step of the central banks' process going back to normalcy would be increasing interest rates. Experts expecting this step earliest by mid-2022. However, given the high debt levels, there is not much wiggle room for some companies to stem higher financing costs. Putting that together with lower margins, there is an increasing risk of defaults. Accordingly, we believe that it makes sense to focus on value investments, especially companies with pricing power.

Additionally, we further believe that the mining industry is undervalued and that there is a potential to see either rising prices or rising dividends. There is a considerable profit margin when comparing the current prices of commodities and precious metals with the actual mining costs. Currently, mining companies might still suffer from their bad image when it comes to their environmental aspect. However, within the last years, mining companies started to invest a respectable amount of money and time into new technology to become cleaner and still provide the broadly needed metals and commodities. The shift in technology, especially in electric vehicles, will result in massive demand for certain commodities. Accordingly, we are convinced that even with the current quite hurtful correction in the mining industry, the business case remains intact.

Currencies: A Question of Time Horizon

Recently, due to higher volatility in the markets, the USD broadly gained more strength. While many market participants believe that the USD will depreciate over time, there are different short-term scenarios where the USD still outperforms other currencies. We have experienced such a scenario this year. While most currencies lost value against the USD year-to-date, the Russian ruble (RUB) surprisingly refused and even gained against the USD. Surging energy prices have helped the RUB to stay stable against the USD. However, when going back to the beginning of 2020, before corona hit the world economy, the RUB was at a better stage than today. This gives us an understanding of how the time horizon, and therefore the long-term perspective, is essential when choosing the currencies to invest in.

Other than the emerging market currencies, some currencies tend to appreciate against the USD or stay stable in the longer term. Examples of that kind of currencies are the Australian Dollar, the Canadian Dollar, the Swiss Franc, or the Japanese Yen, to name a few.

We believe that with the current strength of the USD, there is an opportunity to move out of the USD and diversifying into other currencies, keeping in mind the time perspective.

After China already imposed restrictions on cryptocurrencies back in 2017, the government recently designated any crypto-related transactions as illicit financial activity. This new regulation also includes services provided by offshore exchanges. The reasons for doing so range from environmental causes to the fact that cryptocurrencies are not fiat currencies and cannot be circulated. At the same time, the Chinese central bank is working on its own digital version of its money.

Furthermore, regulators from other countries also raise their voices against the wild west of the cryptocurrency world. While we see some investment opportunities getting approved by regulatory authorities, we are still cautious about including this kind of investment in our portfolios. Nevertheless, we found a bank in Switzerland that can hold and trade cryptocurrencies for our clients if wished.

The prices of bonds have recently lost quite a bit. The fear of tapering, more sticky inflation, and the foreseeable rise in interest rates are all reasons why we could observe a sell-off in bonds. Investors who bought bonds at high prices to sell them at even higher prices should take the risk of tapering seriously. As long as central banks committed themselves to buy government and corporate bonds for a given amount, this strategy was legitimate. However, it becomes harder to play this game if one looks for a buyer who actually cares about gains and losses. Due to the sell-off in government bonds, the yields rose that brought up new opportunities.

Commodities: Focusing on the long-term Trends

We find ourselves confronted with the broad desire to reduce carbon gas emissions. However, since the world is still growing, there must be other solutions than lowering the world's activity. One solution is the shift away from oil, looking for other sources of energy; as seen in the acceleration of the electric vehicles has accelerated over the last three years. However, considering the carmakers' portfolios, there is still a way to go until electric cars replace gasoline and diesel cars. Moreover, this transmission requests many commodities that must be recycled or mined. Accordingly, investments in companies linked to commodities used in the process of electrification can still be attractive.

However, there are risks in the short- to mid-term. China is one of the biggest consumers of commodities. A lot of the material is used in construction, which currently is at risk, as we can see with the collapse of Evergrande. Should this event be the beginning of a structural change where property projects are not finished, that could result in a supply that overshoots the demand.

Precious Metals …Hang in there!

Gold, silver, platinum, and palladium are testing investors again. While stock markets showed a grand return this year, precious metals have underperformed. However, even though the current development hurts, we believe that we are in an environment where precious metals are a vital part of the portfolio. An essential characteristic of an investor is patience. We are confident in keeping up our precious metals exposure for the time being for the following reasons: Stock markets are still highly valuated. The valuation of the current stock markets rests upon ultra-low interest rates and high corporate profits. However, with the cooling down of the economic growth paired with more persistent inflation, we see the threat for dislocations at the markets. Additionally, the end of stimulus spending would reduce the liquidity at the markets. This can bring up worries from investors not being able to sell their holdings, especially when it comes to fixed income.

Gold has proven its value when it comes to inflation. However, this does not eliminate that there are times when gold is under-or overvalued. We believe that within the expectations of inflation, gold is currently undervalued. Accordingly, we stay invested and are ready to reduce our precious metals exposures, as we did in August 2020, once the sentiment turns. Moreover, once gold is picking up, silver, in particular, will do so, too.