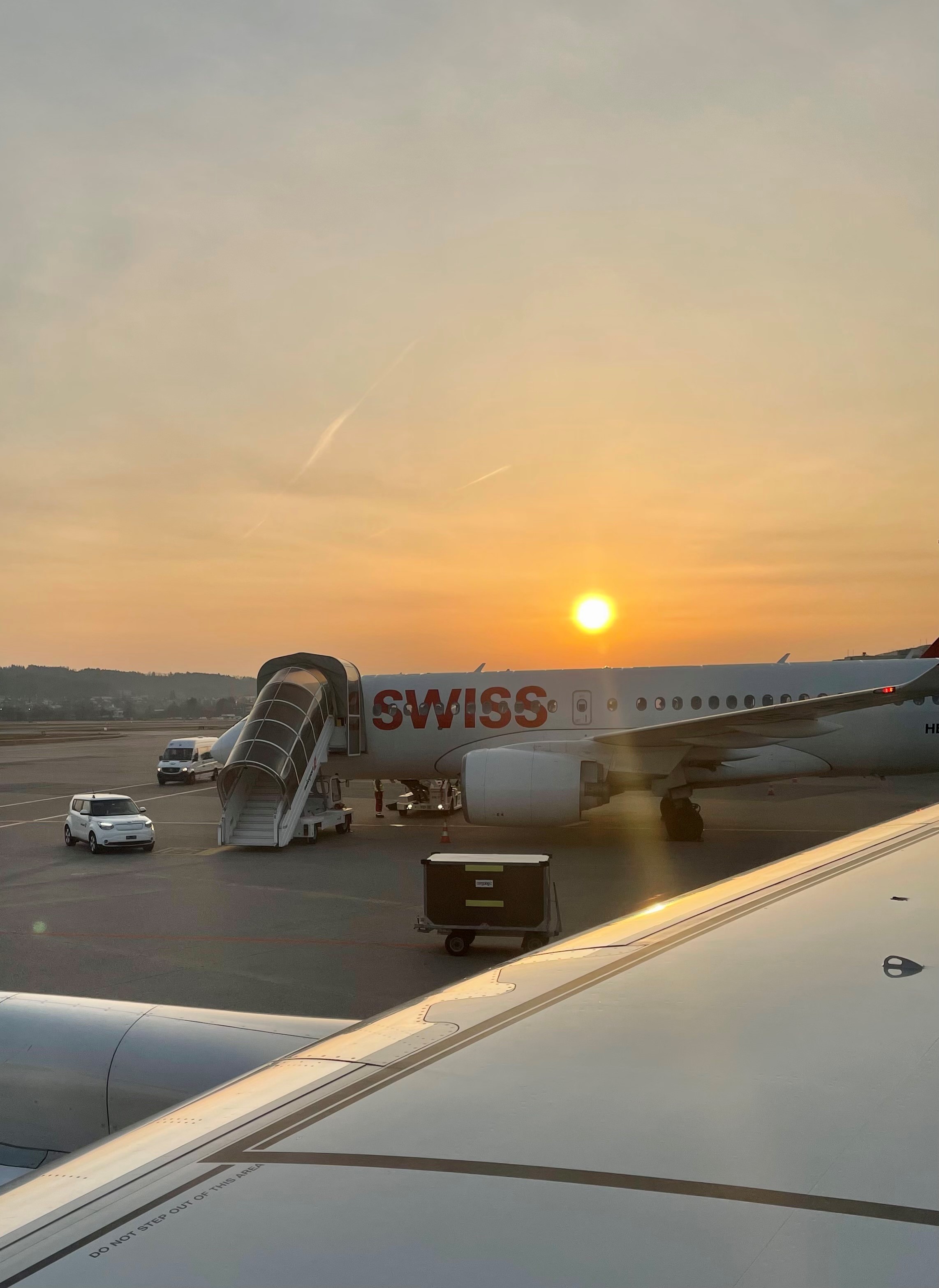 Since I was traveling through Texas and around Atlanta to meet clients and business partners in the past two weeks, this newsletter comes with a minor delay. If you did not have the chance to meet with us, do not worry, we will be back.

In the East nothing new

Having conflicts and wars going on somewhere around the world is not unusual. The Correlates of War Project states that there has been no year without war since 1816.

If a conflict or war is close or affects one directly, people tend to show more sympathy and interest due to the disruption of their daily lives. This is very true right now with the outbreak of the war in Ukraine. This war feels to be quite close to most of us; furthermore, we explicitly are affected by an additional increase in inflation and steeply rising oil prices, making it much harder to ignore the effects of the war.

We deeply sympathize with everyone affected by this horrendous situation, especially all civilians. We would like to take the opportunity to share our perspective on the effect this war has on Switzerland’s economy paired with some historical insights about how Switzerland managed to navigate through previous wars and conflicts as well as potential investment opportunities that arise from the situation.

Since 1815, Switzerland holds a strict status of armed neutrality that is respected globally. Whether this is due to the Second Treaty of Paris signed in November 1815, Switzerland’s topography, its military, or a combination of all of them and more, is not that clear. Swiss neutrality is a cornerstone of our culture, military, and politics.

Nevertheless, just recently, Switzerland’s neutrality was brought into question after the government decided to follow the sanctions against Russia imposed by the European Union. While one might argue that by doing so Switzerland gave up on its political neutrality, we believe that military neutrality does not prevent Switzerland from reacting to a country’s breach of international law. Furthermore, it is not the first time that Switzerland imposed international sanctions. Since 1990, Switzerland has participated autonomously in non-military sanctions imposed by the United Nations Organization (UNO). With its accession to the UN, the implementation of non-military coercive measures issued by the UN Security Council has become binding for Switzerland under international law. In practice, this results in only a few changes, as Switzerland has been implementing such measures in an autonomous manner since the early 1990s.

Stability because of Neutrality

As indicated above, the fact that Switzerland was able to stay neutral since 1815 is not a given, especially considering that both world wars took place all around us. By staying out of both world wars Switzerland was able to build on its territorial integrity and started to outgrow its neighbors economically. During this time, the foundation of Switzerland’s prosperity was laid. As discussed in our recent podcast, one outcome was the successful growth of the Swiss banking industry. Nevertheless, Switzerland’s economy was affected by the wars too; however, the people and industries were able to deal with the challenges and not lose their infrastructure to the aggression of the wars. According to Diem and Maissen, the Swiss economy experienced very little unemployment, and it grew approximately five percent per year in the 1950s and ‘60s.

Due to Switzerland’s neutrality and economic stability, supernational organizations choose Switzerland for their headquarters regularly. Accordingly, Switzerland is home to the United Nations Office at Geneva (UNOG), the European Organization for Nuclear Research (CERN), and the World Trade Organization (WTO), to name just a few.

In addition, we are able to act as a mediator in wars and conflicts around the world. For example, from 1961 until 2015, Switzerland represented the interests of the US in Cuba and vice versa. Most famously, the Swiss mediation services prevented an escalation in the 1962 Cuban Missile Crisis, which nearly lead to WWIII. On another occasion, Switzerland’s served as a representation of US interests in Iran after the US decided to break off diplomatic ties with Iran in 1980. In recent years, Switzerland has accompanied over 30 peace processes in more than 20 countries.

The Consequences of Wars

Besides casualties and the horror experienced by civilians and soldiers alike, the consequences for surrounding countries can start from a lack of a specific product or raw material and reach to a severe increase in inflation or a lack of workforce that is needed to support the economy and the people. The current war coupled with the sanctions imposed intensifies the already high inflation that was provoked by the measures in regard to the coronavirus. This is especially serious since coronavirus measures are still in place in many countries. According to a Forbes article, the Afghanistan war cost America approximately USD 300 million per day. It seems that the Ukrainian war will be much more expensive including not only the direct costs but also the indirect costs due to the sanctions.

It seems clear that the defense industry will be the main beneficiary of the governments' decisions to rebuild their militaries. The question remains whether this is a long-standing decision or if governments will make a U-turn again once the war is over. The new German chancellor Olaf Scholz for example announced that an additional EUR 100 billion (USD 110 billion) is reserved for military spending. While this is a comprehensible decision, the source of funds is unfortunately new debt. As it was the discussion with the stimulation packages in the reaction to the coronavirus measurements, the question is who is going to pay off this debt. Following the debt-to-GDP ratio, one can see that there has been a jump in this percentage number in 2021 again. The estimations for the years 2022 and the following have been decreasing figures. However, considering the current environment, a decreasing debt level does not seem very likely. 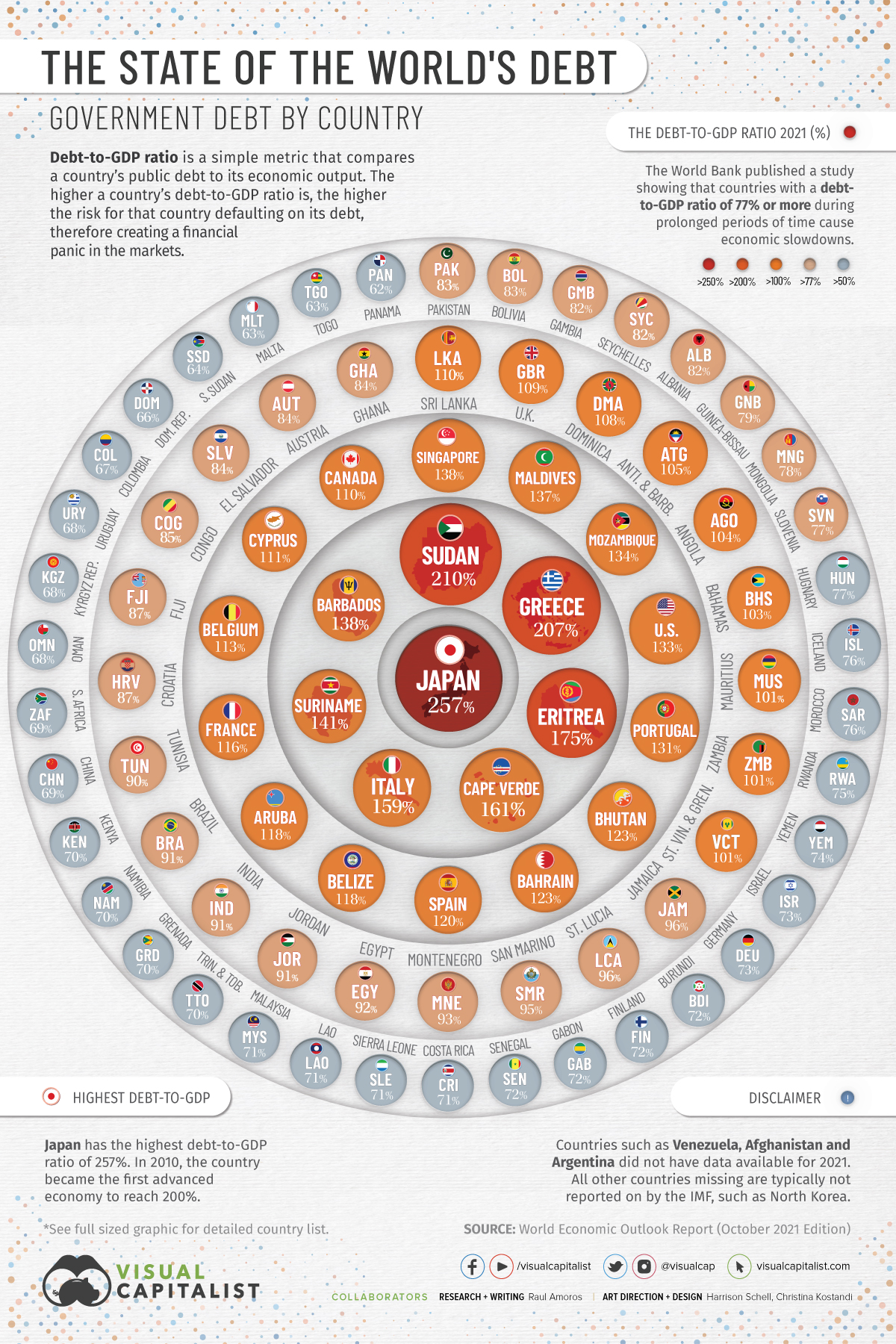 This development shows once more the value of a financial jurisdiction that is fiscally responsible. Switzerland, with a low debt-to-GDP ratio, finds itself in a comparably comfortable situation. Companies from Switzerland tend to have a global approach and therefore enjoy a high amount of respect from different countries. Accordingly, governments tend to trust Switzerland more than other countries. Especially in times of war and distrust, they prefer to buy their products from companies that are regulated by a country that keeps up its neutrality.

The Risk of a Recession

Because of the war, analysts and state secretaries are readjusting their growth perspectives. Accordingly, the question remains whether there is an actual risk of economies heading into a recession. While experts were hopeful because of the recovery of the Omicron slowdown, the factor of war and increasing energy prices added an additional layer of insecurity to the further development of economies. Thinking about the fact, that not even two years ago, crude oil was traded in negative territory—on April 20, 2020, West Texas Intermediate crude dropped to minus USD 40 a barrel—a current price of almost $140 per barrel seems unreal. The latest news on the war is on the shocking brutality of the Russian military and the increasing likelihood of additional sanctions. Further sanctions could lead to an additional increase in the prices of raw materials and products that used to be produced in Ukraine.

While Switzerland finds itself in the same situation as everybody else, the risk of a recession is currently not on the horizon. The State Secretariat for Economic Affairs reduced its expectation for economic growth by 0.2% to 3% for 2022.

Gold runs the Risk of tripping

While gold showed its glance again when markets stumbled, it found its balance around USD 1,930 per ounce. This represents a performance of about 6.1% year-to-date. However, the yearly gold production of about 340 tons of gold in Russia became more difficult to sell. Until 2020, Russia’s central bank used to buy almost the whole production. However, while Russia’s central bank still buys gold, they did limit the purchase price to 5,000 Russian rubles per gram, which represents a price of about USD 1,880 per ounce. This lies about $50 below the current world price. Even so, there are banks in China and India that might be willing to buy gold from Russian producers, there is a fair chance that the current situation will put some pressure on the gold price in the short run. However, we do not believe that this will be a sustainable price level but might bring up some buying opportunities.

In the US, inflation raised further up to 7.9% in February. For the EU, inflation for February was about 5.9%, and in Switzerland’s 2.2%. Even though Switzerland's inflation rate rose as well, it is still in the realm of healthy, especially compared to other counteries. In the months ahead, it is very likely that we see inflation figures rising further. While inflation is a painful development for the people, investors wonder what this means for interest rates. While the Federal Reserve (Fed) in the US raised interest rates in March by 0.25%, the European Central Bank (ECB) and the Swiss National Bank (SNB) left their interest rates untouched. A move of 0.25% in an environment of such high inflation seems not appropriate. However, the markets appreciated this decision and recovered quite a bit since then. Going forward we believe that the Fed will raise interest rates further but with an applied hand brake.

The combination of lower interest rates in Europe and a market that is not as overpriced as it is in the US leads to a situation, where there is quite some potential in European investments. Having said that, the war bears risks that will also keep this potential at bay for the moment. However, should the war be resolved or lead to a situation where the risks are more predictable, the potential will be released.

Another part of the market is fixed income, which is affected by the expected rise in interest rates. The issue is to find companies that have a balance sheet that allows them to stem higher financing costs. Eventually, the existing debts have to be refinanced. While this was easily possible in the past, this will change in the future. Accordingly, it is important to look out for good-quality investment opportunities. However, if you find one, there must be investors willing to sell so that you can buy. This is the main challenge right now. While there is enough liquidity when it comes to junk bonds, people usually do not sell their high-quality bonds if not forced.

After a strong year in 2021, 2022 shows one of the top five worst starts into a new year for stocks and bonds: 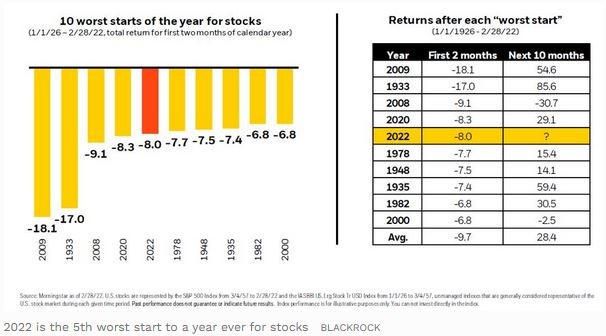 With Europe, announcing to ramp up its armies and military set-up one question investors have to reflect on is whether they want to be invested in a pure defense company.

Other than that, we still believe that companies with pricing power will come out strong of this crisis. As we see inflation spike, companies need the ability to pass on increasing costs. We can observe this quite impressively with energy companies. Rather than lowering their margins, governments starting to spend money in order to help their folk to pay for energy.

The fear of an end of ultra-cheap monetary policies scared off investors and made analysts recalculate their evaluations. Due to the high inflation, which will eventually be followed by higher interest rates combined with the insecurity through the war.

The fact that the Fed decided to hike interest rates by only 0.25% gave investors confidence to return back into markets. However, we believe that professional investors will capitalize on this development and lock in some gains. Therefore, we do not see enough support to believe that this turnaround is sustainable. Accordingly, we expect ongoing high volatility in the markets. While it comes with insecurity about further development, we do also see chances that it will create opportunities.