As usual, we would like to start our reading with some lighter topics before heading into the economic assessment. We are proud to let you know, that so far, Switzerland won twelve medals at the Winter Olympics, five bronze, a silver and six gold. On another note, Switzerland is working passionately on its own trust law. This could have a positive impact that Swiss companies are able to offer services that are even more comprehensive to their international clients, who appreciate the quality and stability of the Swiss system and its legal security. As the last point, today we experienced our “Freedom Day” in Switzerland by having nearly all covid restrictions lifted.

We face all kinds of inflation

As we move through 2022, it becomes very clear that the heightened inflation numbers are not a trifle but are something that should be followed closely. Why is that? While central banks were chasing inflation during the last three decades, now as inflation finally arrived, it seems they did not see it coming. In theory, there are three different kinds of inflation. These are the demand-pull, cost-push, and built-in inflation. The latter usually kicks in at a later stage than the others do. The demand-pull inflation describes rising prices due to higher demand that faces too little supply. The cost-push inflation describes higher prices due to higher input costs such as raw materials and labor. Due to the restrictions during corona paired with stimulus checks as well as increased government spending, we find ourselves in a situation where both of these phenomena occur together. While central banks still talk about some relaxation regarding inflation, they seem not to be aware of the built-in inflation that usually arises due to a wage-price spiral, where employees request higher salaries due to rising living costs. Accordingly, countries are confronted with every single kind of inflation described above. While we are not as confident as the central banks, the one argument we do honor however is, that inflation numbers might ease during 2022 because of a higher base level.

One has to be aware that the central banks plan to increase interest rates and reduce their balance sheets. This is a necessary step in the right direction but leaves us still miles away from where we should be. In the last decade, the doctrine of Keynesianism found many followers. Keynesianism supports a fiscal and monetary policy where the central banks and the governments proactively influence the business cycles. However, what happened, in reality, was that governments and central banks did start to support the economies during a recession but did not stop doing so after the economy recovered. Accordingly, there was never a situation since the financial crisis where the U.S. economy experienced a healthy adjustment and companies were put out of business because they were unable to generate a benefit to society. Accordingly, we see that since 2008, central banks’ interest rates never came close to what they used to be before the great financial crisis (see graph below). 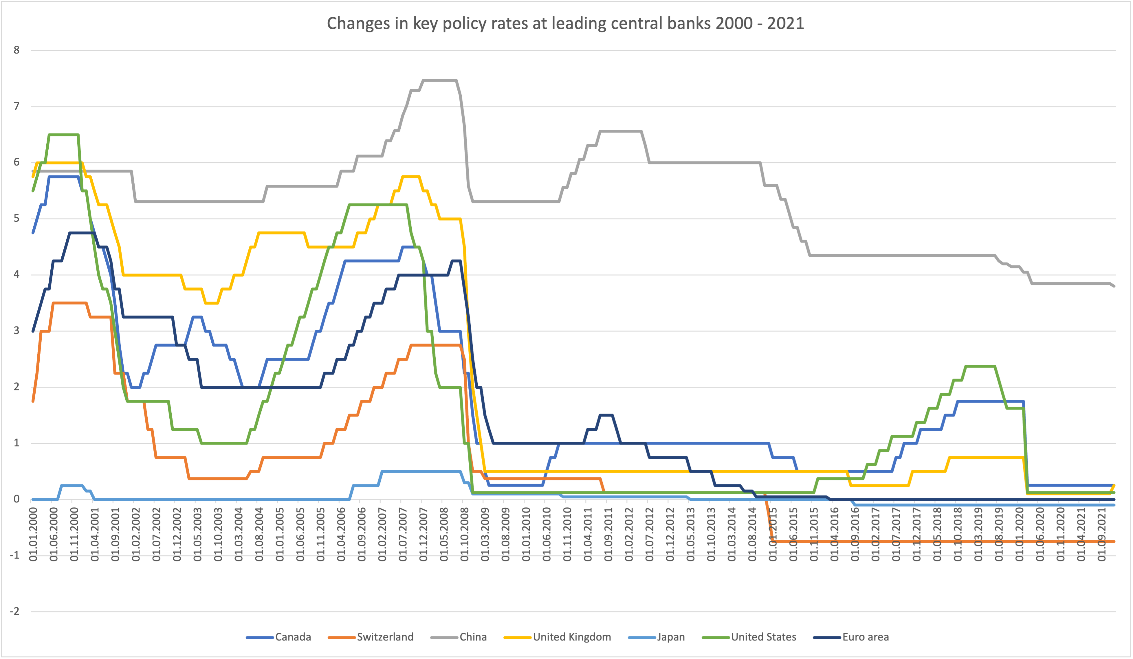 Governments, as well as the central banks, state that the economy is recovering and strong. At the same time, they are not truly willing to move into a more restrictive policy. This shows us that either they are not truthful or not complying with their duties.

Quality stocks are the way to go

While money was nearly free, almost every company was able to survive. Experts often talk about zombie companies when they discuss businesses that are highly leveraged and unprofitable. However, once interest rates increase, these zombie companies either have to raise new money from private investors who buy their stories or will have to declare bankruptcy. While this is an extreme scenario, there will also be trouble for companies with less extreme levels of debt, once debt becomes more expensive. Accordingly, we are convinced that a healthy balance sheet becomes more important as was the case during the last decade. As not everyone is an expert in reading balance sheets, one factor that can give you some information about the company’s financial health is its availability to pay a steady dividend. We believe that companies that are able to generate a cash flow that leaves them with enough money to pay out a steady dividend will be at an advantage.

In recent months, we could already observe a shift from investors moving into value stocks. As Larry McDonald, creator of «The Bear Traps Report» and New York Times best-selling author stated in December 2021, the expectations are that this shift is just starting. Since real interest rates (nominal interest rates minus inflation) are still negative, investors want to stay invested. Therefore, they need investment opportunities that show a decent valuation also in a period of rising interest rates and inflation. Additionally, even though banks benefit from higher interest rates, they might not be willing to pass them on to their clients. Accordingly, we do not believe savers will benefit too much from the higher interest rates.

Inflation and rising interest rates might open up new opportunities

Most government debt has not been profitable for many years now. This is also true for many investment opportunities in corporate debt, especially if you care about quality. Due to high inflation and the fear of rising interest rates, there are opportunities coming up that might justify more investments in fixed income again. Rising demand for bonds of course has an effect on bond prices. With higher interest required from investors, bond prices change. Since we follow a buy-and-hold approach, we believe that finding high-quality bonds at decent prices in foreign currencies can become more interesting again. However, I want to stress again, quality is key. If you own a bond issued by a company or institution that has a low credit rating, you bear the risk that the company will become unable to pay interest or even pay back the principal, meaning the amount of debt purchased.

Not much potential in U.S. markets anymore

Compared to other developed countries, for 2022 the expected inflation is the highest in the U.S. Accordingly, the Fed has to react harsher than others do. Considering the still-high indices, rising interest rates plus lower liquidity will have a severe impact on the markets. Accordingly, there is increasing interest of professional investors in diversifying into markets that are not as highly valued as the U.S. market. Since markets elsewhere did not rally as much as the U.S. did, the risk of a significant crash is smaller. Additionally, this way investors can reduce their risk of a devaluation of the USD. While there is reason to favor the USD due to increasing interest rates, we believe that the disinterest in U.S. markets will lead to an outflow of USD that will result in a weakening USD. As mentioned in our last commentary, we believe that countries that are rich in commodities like Canada, or Australia are offering opportunities in regards to their currency. In addition, Switzerland with a low debt to GDP level and a currency that is the embodiment of security shows further potential. Another choice that might be a little unusual is Japan. Even though they have one of the highest debt levels in the world, they still do not experience any issues of inflation.

In the last two years, we saw high volatility in commodity prices. Let’s remember May 2020, when oil was traded at negative prices. It seems unreal that we are now back at a level where energy is so expensive that some people might not be able to pay for their energy consumption anymore. In China, some industries had to stop their production because of energy restrictions. Coal became so expensive that it was impossible for energy companies to produce electricity at break-even. While some of these tensions eased, there were others coming up especially around Europe. With Russia being the major gas provider for the EU, the current tensions about Ukraine joining NATO puts more pressure on this situation. Just this Tuesday, Moscow declared the start of a pullback of some forces. While this led to an immediate positive reaction at the markets, the threat is not over. Some experts in this field state that Russia is waiting with an invasion to respect China and the winter Olympics. Accordingly, we will have to wait until the beginning of next week to find out how Russia proceeds in this matter.

Gold as a hedge

With higher than expected inflation figures and a trend to less expansive monetary policy, volatility is picking up again. While markets are down quite a bit this year, gold shows a positive performance of more than 2%. We are convinced that gold should be included in your portfolio. However, if you do not own gold in your portfolio yet, it might make sense to wait a little bit. Should markets correct severely or even crash, we believe that gold will not be excluded. This will offer an opportunity to get a position. However, we do also believe that gold will recover fast and move into a bull market, which offers an opportunity to realize some gains which can be used again to take on investment opportunities that will open up in such a situation.

To end, I would like to stress three recommendations about how to position for the coming months. We recommend keeping a balanced portfolio with high-quality investments in companies that follow a profitable business plan that generates enough cash flow to cover their costs and on top of that pay a dividend. Additionally, since we are expecting ongoing volatility in the markets, we are convinced that some exposure to precious metals, either directly or through mining companies offers a welcomed hedge to face stormy weather. Last but not least, if you did not do so yet, start diversifying globally. There are much more opportunities out there and it seems that the risk currently is lower in other parts of the world than in the U.S. We are convinced that implementing these recommendations will contribute to your overall financial stability.

As always, feel free to reach out to us if you have any questions or comments on the above.

PS: I will be in Texas from March 21 - 27 and in Atlanta from March 28 - 30. My trip is booking out quickly, so if you would like to meet in person and did not schedule a meeting yet, reach out to me soon.