It seems like Switzerland has a good year when it comes to sport. After having achieved outstanding results at the Olympia in Tokyo, last Friday, on November 12, Switzerland reached a tie in a soccer game (Fussball) against Italy. As a result, Switzerland qualified for the world championship in Qatar in the coming year. Further, the Swiss National Rugby team has a chance to move into a higher division of the international circuit and in this campaign WHVP’s very own executive assistant, Jess Roberson, is playing with them to achieve this goal.

As we enter into the last weeks of the year, Jamie and Urs are escaping the European frostiness in Costa Rica, preparing themselves for their trip to the U.S. from November 20 until December 5. To slow the spread of the coronavirus, the U.S. closed its borders after March 2020 to travelers from different parts of the world, including Europe, Great Britain, China, India, and Brazil. Also, overland visitors from Mexico and Canada were constrained for some time. On November 8, the U.S. finally opened the borders for vaccinated Europeans and other countries' citizens again. To air travelers, a recently taken Covid-19 test next to the vaccination status must be shown before entering the plane.

After the markets broadly corrected during September, they once again recovered relatively quickly. Accordingly, we are seeing new record highs once again. Investors may ask what is going on at the markets. While a clear answer is impossible to give, we believe that it has to do with the enormous amount of money in the system. Some investors missed performance because they were convinced at the beginning of 2021 that the recovery could not endure the way it has over the year. We had a similar perspective. Some of them lost their patience and used the correction in September to get back into the markets. However, we believe that changing the strategy due to frustration is the wrong move. We feel that the situation did not change for the better. Despite the markets rising, there are several new risks like the real estate market in China, the rise in inflation, and the rising tensions between China and the U.S., and Japan due to their provocations of Taiwan.

On the other side, there are positive developments that seem to be shaping the future and bringing opportunities. In November, there was the U.N. Climate Change Conference (COP26) in Glasgow, UK. U.S. representative John Kerry and Chinese counterpart Xie Zhenhua announced that they have agreed to fight climate change together. This is a vital sign and supports the ongoing efforts to reduce carbon emissions worldwide. While we have already added an investment to some strategies that support this development, different attractive investment opportunities will come up in the coming years. Coal specifically is a massive issue in this regard and will likely be the loser in this development. In addition, fuel is at risk since countries are planning to ban the sale of new petrol or diesel vehicles by 2030. Whether this is feasible, if not to say reasonable, is another discussion.

Equities – when inflation does not matter

As mentioned before, equities are rising, and it seems there is no end. The current inviolability is surprising especially considering the high inflation. In October, the U.S. showed its consumer price index rising by 6.2% on a year-on-year level, the highest since 1990. 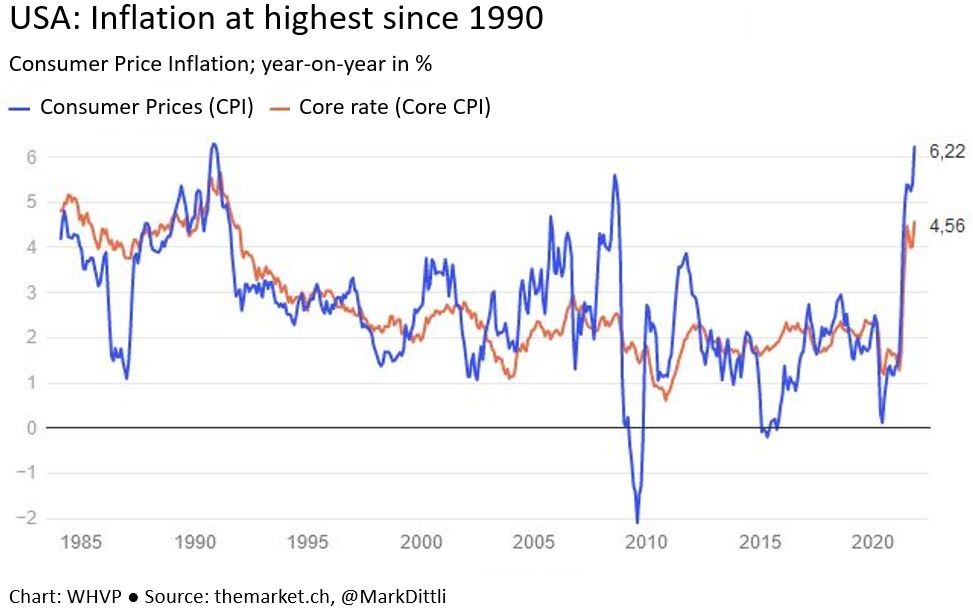 However, not only the U.S. shows inflation above its long-term target of 2%. The EU showed an inflation rate of 4.2% in October. Thinking about this development and the potential that inflation is more persistent than central banks admit so far, the question remains on why equity prices did not correct yet. Should central banks decide to keep the low-interest rates, the consequence is that there will still be no alternatives to equities. However, if inflation goes on, central banks will eventually need to raise interest rates, which in our perspective will lead to a sharp correction in company valuations. However, some asset classes will suffer from higher interest rates more than others, so that central banks will be very reluctant in this step. Next to equity prices real estate, fixed income, and precious metals would be affected too. We had seen the consequences of a less expansionary monetary policy in 2013, 2016, and 2018 when markets reacted with strong negativity.

Within the coming months, major central banks, particularly the Fed and the European Central Bank, will reduce and eventually end their spending programs. This means that their policy will be less expansionary but not necessarily restrictive quite yet. However, especially in the U.S., the expectation is that the Fed will increase the interest rates by 25 basis points at least two times in 2022. Whether this is sufficient to fight off inflation will be seen.

Currencies – they are fighting back

We experienced quite a strong development of the U.S. dollar this year. Unfortunately, as it helped last year to be diversified into currencies globally, it hurt this year. The alternative view, supposing you want to see it from a positive angle. There is now another opportunity to diversify part of one’s U.S. dollars at current rates into other currencies if you believe that the U.S. dollar will weaken over the long term. Since we are convinced of the devaluation of the U.S. dollar, we do think that international diversification is crucial for building wealth across generations.

To give some examples of what this year’s appreciation of the U.S. dollar means, if you had moved part of your U.S. dollar into the Swiss Franc at the beginning of 2021, you would see a negative value of about 4 percent on this position. Making the same example with the Japanese yen, you would see a negative of about 9.5 percent. The same is happening with most other currencies, which leads to a year-to-date U.S. dollar index (DXY) performance of about 5.76 percent. This means that the U.S. dollar has increased in value against a basket of selected currencies (Euro, Japanese Yen, Pound Sterling, Canadian Dollar, Swedish Krona, and Swiss Franc). However, broaden the horizon to five years; you see an appreciation of the Swiss Franc by 9.3% but still a depreciation of 2.9 percent of the Japanese yen against the USD. That shows that choosing the correct currency and discussing the time horizon is essential before diversifying.

However, many people do not know that diversifying into other currencies than your main currency can serve as an inflation hedge. Accordingly, if you have an inflation of over 2 percent on average during the next five years in the U.S. dollar, having part of your money in Swiss Franc, which is likely to experience an average yearly inflation rate below 2 percent, the move may prove to be beneficial. Please be aware that such a strategy and its possible outcomes should be discussed and understood before making the move.

Cryptocurrencies – the narrow ridge between investing and insanity

As we all know, cryptocurrencies are very volatile, and it is pretty tricky for a non-professional to choose the right one to invest in. However, it seems that next to Bitcoin, Ethereum is in the process of positioning itself as an acceptable investment for people who want to dip their toes into this relatively new investment world but find Bitcoin too expensive. However, it is still highly affected by the news, for example, when China made all cryptocurrency transactions illegal in September. The insanity of some hypes became known when Elon Musk tweeted something about cryptocurrencies. After observing a crazy increase in the joke cryptocurrency Dogecoin back in April, we observed a similar rise in Shiba Inu, which was inspired by Dogecoin in its creation.

Nevertheless, the Securities and Exchange Commission (SEC) in the U.S. approved the first Bitcoin ETF in October, giving access to a broader range of investors. This is a vital sign that Cryptocurrencies are likely here to stay.

Fixed Income – do not forget about the absolute return

Bond prices and inflation are closely linked. Accordingly, if inflation expectations move up, bond prices move down. A lower price means a higher return and vice versa. From the investor's perspective, it is essential to look at the two years treasury and ten years treasury notes in the U.S. Even so, we are in Europe and focusing our horizon on non-U.S. investment opportunities. The U.S. has a reasonable impact on global markets. We could observe a sharper rise in 2 years treasury notes with the latest inflation numbers than in 10 years treasury notes. That means that the inflation expectations for the short term are higher than for the long term. The 5-year breakeven inflation rate published by the Federal Reserve Bank of St. Louis shows the expected yearly inflation rate, which currently lies at 3.11 percent.

Commodities – there is a need

When talking about commodities, we narrow ourselves to energy and metals, excluding agricultural products. The Climate Conference in Glasgow has a lot to do with commodities. Accordingly, they are planning to enormously decrease the use of coal and fossil fuels to limit climate warming. However, while there are big plans to reduce carbon emissions in the long term, there is still a lack of technology and infrastructure. Recently President Joe Biden signed the infrastructure bill, which according to Rhodium Group, a research firm, can contribute considerable help to the U.S. in reaching its climate goals. However, before getting to the point where economies like the U.S. and Europe and especially emerging economies can dramatically reduce carbon emissions, there has to be a lot of construction and updating, which means there is a need for commodities. Consequently, the Climate Conference's efforts last week have the potential to threaten commodity prices in the long term but not that much in the short- to mid-term.

Additionally, while there are commodities at risk, this presents an opportunity for other needed resources, especially in regards to electric vehicles and hydrogen energy sources. We are convinced that big commodity companies (e.g., miners) will shift their focus to the resources needed for the energy transformation.

Similar to the U.S. dollar, while precious metals shined last year, it was not connected with much joy this year. However, beginning with the market correction in September, we have seen regaining gold, silver, and platinum prices. In addition, we eventually experienced a recovery in the precious metals mining industry that outperformed precious metals prices. While the direction is favorable, we have to be aware that a drop is not impossible. For the gold price, it is crucial to overcome USD 1875 per ounce within the coming days. If not, we might see the gold price going back to about USD 1800 per ounce instead of going up to USD 1900 per ounce.

Considering that precious metals, above all gold, have compiled a reputation as a protection against inflation, [JR1] the forecast looks quite advantageous. However, keeping in mind the possibility that central banks raise interest rates, there is also some risk for precious metals as an investment. Which impact will be more significant is hard to predict. However, here again, the time horizon is crucial.

Are you interested in discussing any of the above in more detail?

Please do not hesitate to reach out to us: