It is done… after a challenging first half of the year, the U.S. economy added an overwhelming 528,000 jobs in July and brought the unemployment rate down to 3.5%. Additionally, the consumer price index rose by “only” 8.5% instead of the expected 8.9%. Having this news in mind, one could think that the technical recession (two consecutive quarters of negative GDP growth) in the U.S. is already resolved. However, on the other side, we are hearing that big companies like Amazon, Shopify, or Microsoft started sending blue letters to their employees and will probably continue to do so.

These days, there is many different, mutually contradictory news out there. This can be frustrating when trying to make sense of the current global situation. Since mid-June, we can observe a rally in the markets that seem that investors did anticipate the most recent positive news correctly. However, we at WHVP are sceptical about the current recovery. When looking into the jobs report and the unemployment number there are some important facts to keep in mind. When thinking about the economy there are different indicators that are giving us hints on how the economy is doing. However, these indicators have different characteristics. There are leading, lagging, and coincident indicators. The unemployment rate counts as a lagging indicator. This means that this indicator either reconfirms or challenges the assessment of the economy. Consumer confidence, the purchasing manager’s index, or initial jobless claims count as leading indicators. On a side note, it often makes sense to consider different indicators instead of following just one. Focusing more on the leading indicators, the most recent market rally feels more like a bear-market rally instead of a sustainable recovery.

While consumer confidence is recovering, the purchasing manager’s index, as well as the initial jobless claims, worsened during the last months. In an environment of looming recession, it is crucial to choose a place for your investments that gives you protection and peace of mind. We believe that Switzerland is the place to be. While we are probably a tiny little bit biased, I will explain to you in different aspects, why this is our belief. Before we start, let me say this: A “recession-proof” investment per se does not exist. However, some strategies can help your portfolio to better weather an economic storm.

We will even put a Square Peg into a Round Hole

After the worries of a technical recession in the U.S. intensified, the White House decided to alter its definition of a recession. In a blog post published on July 21, the white house stated: 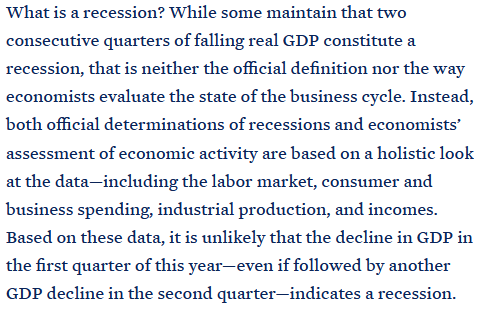 While in general, it is not wrong to challenge existing models and definitions, the timing and circumstances add a bad aftertaste to this blog post. In Switzerland, the economic situation is a different one. For the first two quarters, Switzerland’s gross domestic product grew by 0.5% and 0.2%, respectively. This is despite the most recent update from the Swiss Economic Institute that shows that the world economic slowdown is running its course. Reference is made to coincident and leading indicators instead of lagging indicators. Considering the current global environment, such an evaluation seems much more reasonable.

When talking about fixed income, we usually focus on corporate bonds or bonds issued by supranational organizations rather than government bonds. However, if you are wondering about the investors’ confidence in a country’s economy, compensation for government bonds is crucial.

When looking at the USA we see a so-called inverse yield curve. This means that the requested compensation for short-term bonds is higher than for long-term bonds. This is counterintuitive since the insecurity of the future increases with a longer maturity. I.e., if you get paid 2% per year of your lent money for 10 years but 2.5% per year if you lend your funds for 2 years, the yield curve is inverse. While this means that investors assess the insecurity (and therefore the risk) of the economy in the short term as higher as in the long term, such a scenario has a track record of predicting recessions. In this regard, see the graph below. 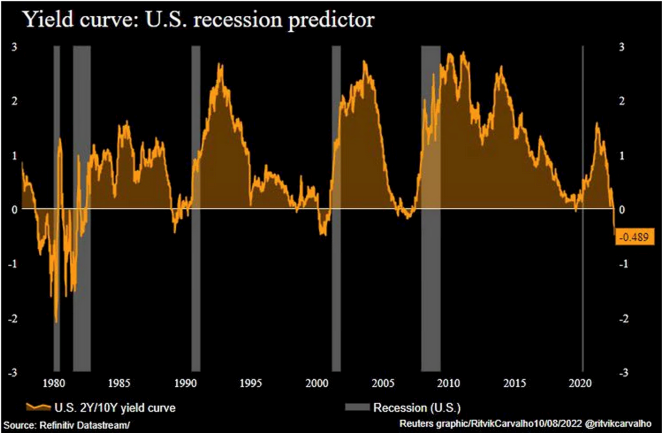 Other than helping to anticipate a recession, the government bond yields are crucial for the evaluation of the overall bond market. While increasing interest rate hikes usually lead to lower prices in bonds, it mainly affects bond traders. Since we only buy bonds if they have a reasonable yield and hold the investment until maturity, the volatility in between might be uncomely since it looks bad on the statement but is not a loss that ever will be realized. The current environment of rising interest rates and high inflation put bond prices to levels where attractive opportunities arise. Same as in the equity markets, you never know whether the price of the bond you are looking at already reached its low, it is key to not becoming greedy. Accordingly, we are happy to get the possibility to dedicate a certain exposure to the fixed income area again.

What is worse than a Recession?

While no country is fully protected against a recession, especially in the current environment, one should look out for further risks. One situation, politicians and economists are even more scared of than a recession is stagflation. Stagflation is a status that combines the characteristics of two different words: stagnation and inflation. While stagnation would mean slow or no growth, it would still be better than an economic contraction. However, it seems that in some circumstances we will have a situation of a contracting economy being additionally exposed to high inflation.

In the case of the U.S. or different countries in Europe, there are inflation figures close to 10%. While inflation eased a bit in July in the U.S., this is true only at very high levels. One must be aware that the target rate lies at 2%. At the moment, inflation is at 8.5%. As mentioned, the same is true in the Euro area with an inflation of 8.9% in July.

Comparing these figures with Switzerland, inflation of 3.4% for July seems to be reasonable. Core inflation that strips out volatile items like fuel and food prices fell 0.2% versus June and rose 2.0% year on year.

This leaves the Swiss National Bank (SNB) in a comfortable situation where it can increase interest rates to ultimately end up in positive territory again. Since the main duty of the SNB is to ensure price stability, they have quite a tricky job because the exchange rate has a considerable influence on price stability. Plus, if the Swiss franc becomes too expensive that would be an issue for exports which represents a large part of Switzerland’s gross domestic product.

However, within the current environment, the SNB has gotten the chance to get out of negative interest rates. Back on 16 June 2022, the SNB hiked interest rates from minus 0.75% by 0.5% to minus 0.25%. Our expectations are that the SNB will hike interest rates by another 0.5% on 22 September 2022. This will strengthen the Swiss franc against other currencies. While this is usually an issue it should not be this time because it will be relativized by the lower inflation rate in Switzerland.

While the Swiss franc recently weakened against the USD it strengthened considerably against the Euro. Since Swiss companies do import a considerable part of their raw materials from Europe or have certain production sites in the EU, the weakening EUR set off part of the inflation. Accordingly, Swiss companies got more time to adjust to the new high inflationary environment and were able to get their learnings by looking abroad. This gives us among other reasons confidence that the Swiss economy will be able to better deal with a global downturn.

The Importance of Consistency

As we could observe for many years, western governments are huge fans of Keynesianism. The Keynesianism policy states that the government or the central banks should intervene in order to reduce the severity and duration of a business cycle. While it was meant to intervene when the cycle is close to a peak and goes through, politicians developed a habit of permanently chasing support for the economy. Considering the statement of the Fed and the U.S. government, that the United States of America is not in a recession, the question remains, why did they come up with a new comprehensive infrastructure program as they just did? I am talking about the Chips and Science Act which prides itself to lower costs, create jobs, strengthen supply chains, as well as counter China.

One of the main reasons given by the government why the U.S. is strong and not in a recession is that there is little unemployment. If the government truly believes that this is a sustainable situation, indirectly boosting new job offerings with subsidies financed through new debt is unreproducible. Please keep in mind that my reasoning is solely based on economical thinking and does not consider thoughts of national security or suchlike.

While there is also a budget for subsidies in Switzerland, the discussion is about how to allocate it to different industries. If the politicians desire to subsidy another industry, they must reduce someone else’s budget. This is called a “debt-break” which prevents the erratic growth of national debt. Our history coupled with this mentality leads to a situation where companies have a great sense of responsibility. The result is that entrepreneurs are educated to precautiously take steps to ensure their survival.

What is up with Gold?

When precious metals prices, in particular gold, do not move straightly in the direction people expect, it does not take much time until “experts” start to question the protection precious metals offer. However, looking back gold did indeed outperform the markets in times of crisis (see graph below). 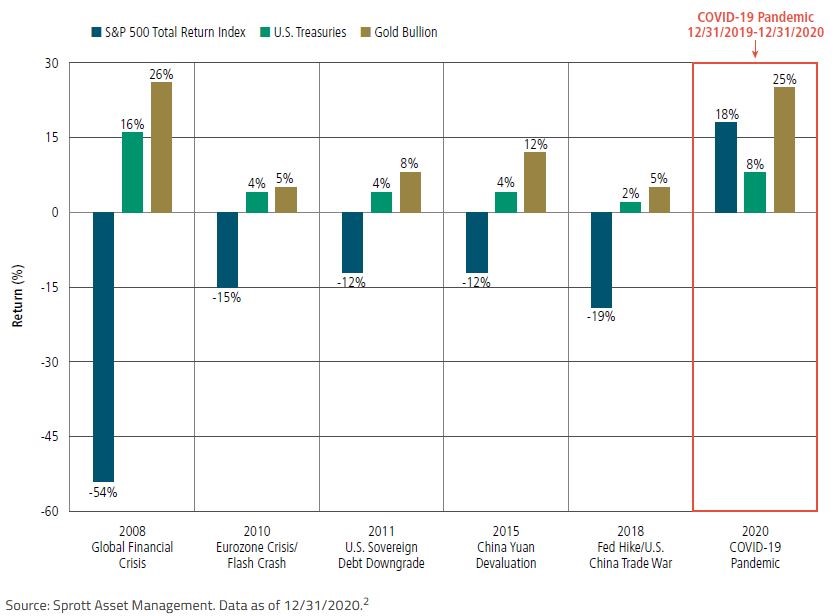 Nevertheless, it is crucial not to get distracted if the price of gold does not move the way you hoped in the short term. Furthermore, there are differences in the various precious metals. While silver is largely used as an industrial metal, there is more volatility in its price than is the case with gold. The same is also true for platinum and palladium. Nevertheless, this distinction allows more diversified investment approaches for the different metals. For the near future, we are in particular bullish on gold and silver, because they usually move together. Furthermore, it is interesting to see that the gold-silver ratio moves close to 90 which is largely above the historical average.

Switzerland… the Place to be

I must admit while writing this article, I felt like working for Switzerland Tourism (which I do not). By the way, if you click on the picture below, you will enjoy a beautiful and funny video.

However, back to the topic. We believe that Switzerland combines a stability and track record that gives us the confidence to focus even more on Switzerland and its economy than we did so far. The fact that many of Switzerland’s corporations are globally positioned, provides a certain level of diversification. Additionally, Switzerland is still highly valued by most countries for its neutrality. This gives us further confidence that especially in times of disputes and distrust, Switzerland can provide the level of confidence and stability governments, investors, and other companies look for. Nevertheless, having this in mind, we want to stress that within the next 6 to 12 months one must have patience and be aware of the ongoing volatility in the markets. Therefore, as we stressed several times already, it is of utmost importance to do thorough due diligence before choosing an investment.