Earlier this month the FED held its latest press meeting where another interest rate hike of 0.75% was announced. This was the fourth consecutive rate hike. During the press conference, a reporter asked about the expected positive reaction from the stock market to the announcement (it turned out after the conference the stock market has not reacted positively to the rate hike news at all) and Powell replied:

…We have a ways to go. And the last thing I'll say is that I would want people to understand our commitment to getting this done. And to not making the mistake of not doing enough or the mistake of withdrawing our strong policy and doing that too soon…

This statement led most market participants to conclude that the FED is going to continue tightening for quite some more time. Consequently, while we do already asses the current situation as a technical recession, we do expect that in 2023 a formal U.S. recession will be announced and generally accepted.

Now last Thursday, the official U.S. inflation numbers for October were published (7.7%) and they were lower than what was generally expected (8%). This means that investors now are split and many speculate that this will influence the FED and lead to them not being as hawkish as expected. Consequently, the US dollar lost value against the Swiss franc almost immediately: 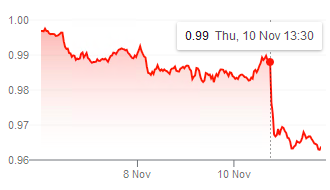 While this logic is certainly understandable, in our eyes it will not be enough to derail the FED from its rate hike cycle over the next few months.

Now raising interest rates does not only have a direct impact on investment opportunities like stocks, bonds, or precious metals but also has a significant impact on the government’s budget – especially for countries with significant government debt like the U.S. Below is a histogram of U.S. government debt over the past decades. Another way to keep an eye on the national debt is the National Debt Clock where we can see that the U.S. currently has over USD 32 trillion in debt. Broken down this means over USD 247’000 of debt per taxpayer.

Now while these are huge numbers, it is important to keep in mind that government debt cannot be assessed exactly the same as private debt. Government debt is not always bad.

Simply put, government debt is the amount of money that a government owes to outside debtors. Meaning the accumulation of annual budget deficits. It's the result of years of politicians spending more than they take in via tax revenues. Government debt allows for economies to grow and often times government leaders prefer to increase debt than raise taxes. When used properly, it can be a tool to raise the standard of living of the population.

However, if it is misused, it can have catastrophic effects. Since absolute numbers cannot be used to compare different countries with each other, a popular way of checking a country’s debt level is to put it into perspective to its gross domestic product or short GDP. According to a paper from the world bank (Finding The Tipping Point -- When Sovereign Debt Turns Bad), public debt becomes problematic after it exceeds a threshold of 77%. If the debt is above this ratio, each additional percentage point of debt costs 0.017 percentage points of annual real growth.

Unsurprisingly, as interest rates now are rising significantly, it becomes more expensive for a country to refinance its existing debt. In time, income has to go toward debt repayment, and less toward government services. A scenario like this could lead to a sovereign debt crisis. One famous example of this was Greece’s sovereign debt crisis in 2010. At that point in time, the country had a debt-to-GDP level of 160% (one of the highest in the world at that point) and a budget deficit of over 12%. To put that into perspective, the U.S. currently has a ratio of nearly 140% (see graph below). 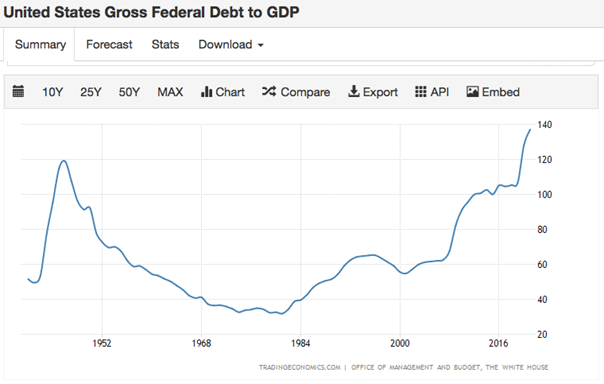 Of course, the two countries and their situations cannot be directly compared. The US dollar is currently the world’s reserve currency, meaning the currency will stay more stable even if more money is printed. And the economic power of the U.S. also means that U.S. debt is a relatively safe investment. Nevertheless, the development is worrisome.

So, what can you do about this development? Unless you are an elected official at very high levels of the government, your options are quite limited in terms of reducing your government’s spending. However, when it comes to protecting your personal wealth, there are options. For example, you can move part of your wealth to countries that are safe, well-versed when it comes to financing, and more fiscally responsible. Many of them offer higher levels of safety for your money and at the same time, you can benefit from international investment diversification.

As we have already spoken about in previous publications, almost all asset classes have been down this year, except for the United States dollar. This might sound counterintuitive considering what we just wrote but don’t worry, we will get into some of the reasons for the strength in just a moment. But before that, let’s just look at how much stronger the U.S. dollar got. The U.S. Dollar Index, which measures the greenback against a basket of other currencies, is up more than 17% so far, this year.

The U.S. dollar is strengthening because of the FED’s hawkish monetary policy stance. Interest rates are now at a range of 3.75% - 4% compared to nearly zero at the beginning of the year. But this is not the only reason for its strength. While in our eyes we are at the beginning of a U.S. recession, the U.S. economy still looks better than other regions at the moment. On top of that, global uncertainty and geopolitical risks are driving investors into perceived safe-haven investments like the U.S. dollar.

The European Union is currently struggling with the consequences of Russia’s war on Ukraine, especially in the form of significantly higher energy costs. Japan is struggling with lower global demand for manufactured goods, which make up the better part of its exports. Additionally, the UK is wrapped up in domestic political disputes as well as an economic downturn.

Despite all of that we don’t believe in the long-term strength of the U.S. dollar. One of the main reasons for that is the initially described volume of government debt and the lack of sustainable fiscal policy as well as the continued level of inflation. This means the current short-term strength is a window of opportunity for international diversification. Foreign investments are currently significantly cheaper for Americans than they were a year ago and there are still options that provide upwards potential in the long term, such as the Swiss franc.

Now rising interest rates don’t just affect currency values, they also always have an impact on stock markets. From the financial crisis until the end of last year, we were in a low-interest environment allowing heavily indebted tech stocks to grow tremendously. Now when interest rates rise, stock markets tend to fall because the stocks lose value due to lower future earnings. Refinancing becomes more expensive, making value stocks more interesting again. Not all countries raise interest rates at the same speed and thus not all stock markets around the world will be affected to the same level. This leads us back to the topic of diversification and how your overall financial situation can become more stable through being exposed to different markets and geographical areas. For the time being, we will focus our investments on economies that we expect to be outperforming the U.S. economy, like Switzerland.

Nevertheless, we do expect that the stormy times in the stock markets will continue for the next months. However, it is always important to keep in mind, that a crisis always is a breeding ground for opportunities as well. As mentioned in a previous commentary, we do believe that the U.S. will be heading into a generally accepted recession in 2023, which will for us be a sign to go back into the markets more strongly again. The stock markets tend to be about half a year ahead of the economy so the beginning of a formal recession will be a sign to us that all negative developments have been priced in and that the stock market will recover more sustainably. But even before then the current sell-offs might present opportunities. We continue to focus on industries with strong pricing powers that tend to perform better during recessions, like healthcare, food, consumer good, and basic transportation.

Not just stocks are struggling, bonds are having a historically awful year as well. While during normal bear markets in stocks people invest in lower-risk bonds, this year everything is different. Bond yields, rise as their prices fall. Normally, a rising yield should mean that there’s less demand for bonds because investors would rather put their money into higher-risk (and higher-reward) stocks. Instead, markets are plummeting, and investors are flocking out of risky stocks, but yields are going up. Why is that? Well, it goes back again to the FED. As previously mentioned the high inflation has led the FED to fight back, and as a result, the yields on US Treasury bonds have soared.

Another valuable observation is, that investors are more worried about short-term developments than longer term. That’s spurred an inverted yield curve – when interest rates on short-term bonds move higher than those on long-term bonds. The inverted yield curve is a particularly ominous warning sign that has correctly predicted almost every recession over the past 60 years. The curve first inverted in April of this year, and then again, this summer.

Despite all this doom and gloom, moving away from those record low yields of the past ten years due to the aggressive shift in the FED’s policy means that bonds are becoming more interesting again. Central banks around the world have responded to elevated inflation by hiking interest rates– and bond yields have increased alongside them. For the first time in many years, bonds are becoming attractive investment options again. In addition to providing diversification, there are additional opportunities out there for bonds denominated in foreign currencies that offer upwards potential against the U.S. dollar.

Since higher interest rates mean more opportunity costs for precious metals, and because the U.S. dollar has been exceptionally strong this year, we continue to see pressure on precious metals and especially gold. Below is a graph that shows the relation of the gold price (orange line) development against the value of the U.S. dollar (blue line) over the past ten years. 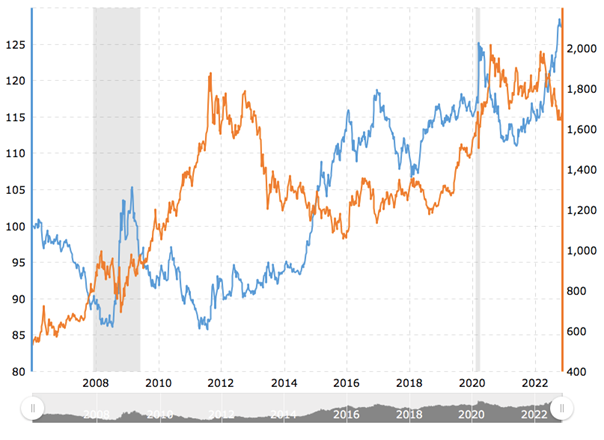 Accordingly, we do expect the gold price to recover quite significantly once the U.S. dollar loses its short-term strength. Additionally, in the past gold has always been positively correlated with increased geopolitical tensions. We saw this in the 1970s during several crises in the Middle East, the Gulf War, and also more recently during the Corona crisis. We do not have any reason to believe that gold has lost its position as a hedge. In today’s world, there is certainly no lack of geopolitical tensions. We face the war in Ukraine, the tensions between China and Taiwan, as well as the China – U.S. trade dispute, the inflation crisis in Turkey, and the uncertainty in terms of political developments in the U.S. Blackrock has put together a risk map that shows some of the geopolitical hotspots, including their likelihood and potential impact on markets. 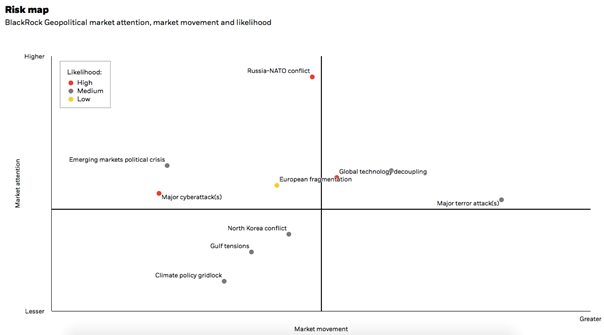 We therefore still feel strongly that it makes sense to keep a portion of the portfolio in precious metals as a hedge against those geopolitical risks, inflation, and the stock market.