At least, slowly but surely, borders open again, and traveling becomes more and more feasible. While the Swiss government started easing measures already back in March, I am more than happy to let you know, that entering Switzerland is possible without any coronavirus restrictions. There is no requirement to be vaccinated, tested, or recovered. Should you decide to use this opportunity, please let us know in advance and we will be happy to welcome you to our offices in Zurich. Additionally, if you come to Switzerland and need some inspiration on what to do, please shoot us an email and we will happily send you a guide with some ideas put together for you.

Markets do not do well, but the U.S. dollar does

This year, making the right investment decisions has been quite challenging. Markets are down double digits year-to-date. The game was therefore not about gaining the most but about losing less than everybody else. Investors are unsure about how to position their portfolios. While some say that this is the beginning of a bear market, others state that the current weakness in the markets is a buying opportunity. We believe that the current downward movement will not be reversed until there is a mutual effort to change something about the current situation. Accordingly, from our perspective counter-movements represent opportunities to get out at a better price instead of giving confidence that the markets go up further. However, there are always exceptions where it makes sense to stay invested or even take in new investments.

Having a look at the charts of the last 18 months, one might think that the current price levels are an attractive buying opportunity. However, do not be fooled by the short-term view. Looking at the basics, after the coronavirus hit, the valuation of many stocks took off and skyrocketed to dizzy highs. Consequently, we often find stock prices at levels, where they might not be overly expensive anymore but also not cheap either.

Going back in history, the similarities to the dot-com bubble become clearer. While the Nasdaq peaked in March 2000, bigger companies such as Cisco, Intel, and Oracle were able to keep up their strength until autumn 2000. We saw similar behavior when the FAANG companies were able to stabilize the Nasdaq at first before they started to crash too this year. The world-famous ARK innovation ETF is down more than 70 percent from its all-time high. Moreover, after the Nasdaq peaked in March 2000, the index experienced no less than 16 bear market rallies until it finally reached its low in October 2002 (i.e., it took two and a half years from the top to reach its low). 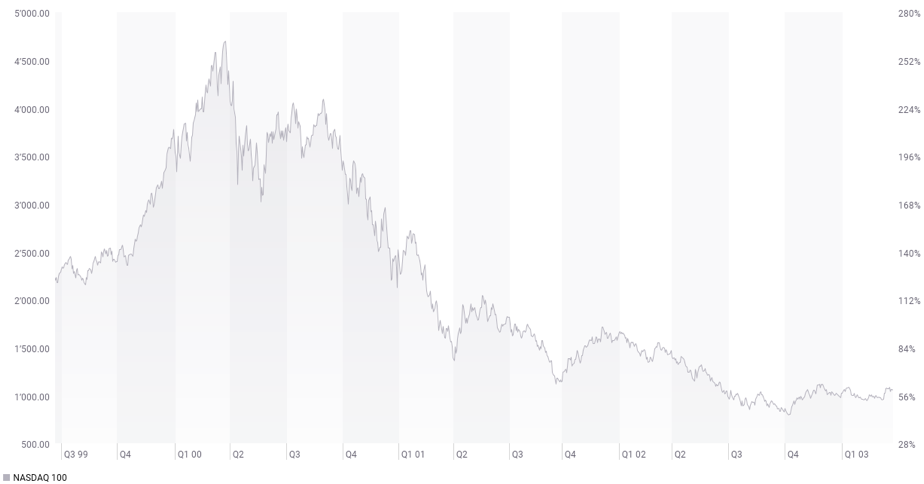 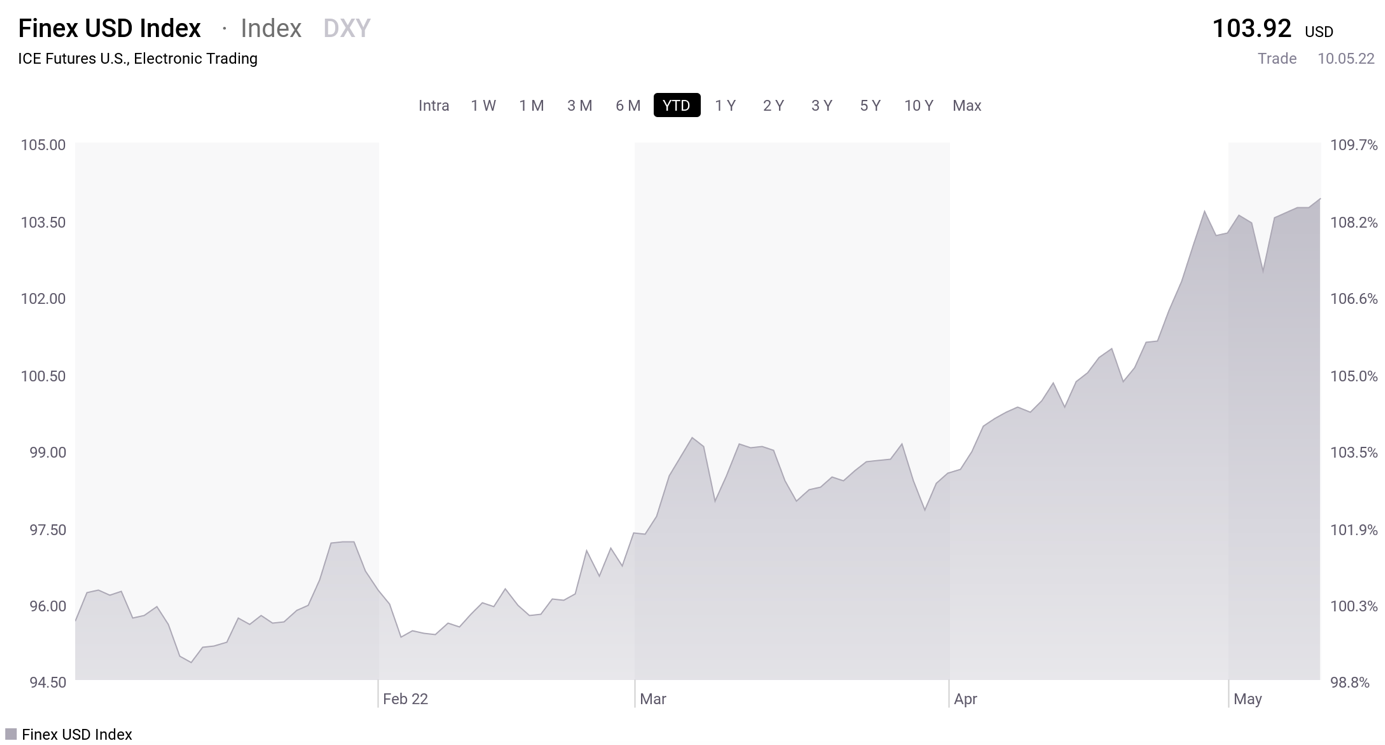 Let’s stay with the U.S. dollar index for now. Following the sharp stock sell-off driven by concerns about the Fed’s aggressive tightening, the DXY reached a high of 104.07 on May 5th. This is the highest the index reached since 2002. Back in late 2016 and in March 2020, the DXY climbed above 100 too. However, it seems that there is resistance at this level.

What does a strong U.S. dollar mean for America?

Having a strong U.S. dollar might sound attractive for Americans, especially when traveling or importing products since it feels cheaper to do so. However, for America as a country with a trade deficit (meaning that America imports more goods than they export), a strong U.S. dollar is an issue. In fact, while products become cheaper for Americans, products that are exported to other countries will become more expensive for the consumers. Coupled with high inflation that drives product prices upwards, which leads to a situation where foreigners are not willing to buy as many products from the U.S. as they used to. Consequently, there is a risk of a further growing trade deficit for the USA. Going one step further, this means that the companies who produce products or offer services out of the U.S. must either find buyers in the U.S., lower their profit margins, or go out of business.

Going back in history, such a situation can be found back in the 1980ies. Back then, the U.S. dollar index increased up to a record 163.83 followed by a decrease initiated in France, West Germany, Japan, and Great Britain. The reason for the strong U.S. dollar was a contractionary monetary policy run by Paul Volcker paired with an expansionary fiscal policy run under Ronald Reagan.

Considering the infrastructure program (Build Back Better Agenda) that was agreed on last November and defines a considerable part of the U.S. spending for the next ten years paired with a tightening monetary policy by Jerome Powell represents a similar situation bearing similar risks. Other than in the 80ies, the Fed faces high inflation that does not allow them to change its strategy.

While not enough research was available in the 80ies whether currency intervention does work, the situation is a different one today. Long story short, after discussing the issue of a too strong U.S. dollar in the years before, in 1985, France, West Germany, Japan, Great Britain, and the United States agreed in the Plaza Accord to purposefully depreciate the U.S. dollar significantly.

The U.S. dollar will weaken again

As there is more information available and experiences could be collected, I believe that there is no interest in letting the U.S. raise much further. Most countries already fight increasing inflation same as the U.S. does (Switzerland being one of the few notable exceptions). Additionally, concerns about a recession or stagflation are present all around western economies. The Bank of England recently warned of a recession, simultaneously being forced to further increase their interest rates. This led to a weakening of the British pound. However, taking into consideration that the Bank of England was one of the first in the western economies that started raising interest rates last December, it becomes clear that they are more efficient in evaluating the risks and taking measures.

When the U.S. dollar becomes strong, the prices of commodities tend to decrease. While this is partly true for now, it is not fully. When it comes to the oil price, the strong demand for oil paired with the embargo on oil imports from Russia drives prices up to levels that have not been seen for a long time. This shows in an impressive way how serious inflation is. Considering, the fact that these commodities are traded in the U.S. dollar, an appreciating U.S. dollar makes it even more expensive for other countries that want to buy commodities.

Accordingly, there is an interest in many economies to have at least a weaker U.S. dollar hoping inflation will not spike further. However, to make sure that inflation does not spike further, the demand must either be lowered, or production must be increased. Both demand and supply are partly driven by price. Usually, the government regulates demand by imposing taxes or releasing regulations, we find ourselves in an environment, where increasing prices would be contra-productive since citizens already struggle to pay their energy bills and take care of their families. However, to protect the citizen’s wallets, governments could either release taxes (which was done by some governments), limit the asking price (which was discussed by some politicians to answer the inflation and was tried under Nixon), or make sure there is more supply. None of these solutions seem very feasible which makes us believe that high energy prices are here to stay.

Same as with commodities, precious metals are traded in the U.S. dollar. Therefore, even if gold does trade below USD 1,900 per ounce again, in Swiss franc or Euro terms the gold price still trades close to its heights from earlier this year. This is due to the strong U.S. dollar. However, following the strengthening of the U.S. dollar this year so far, the price of an ounce of gold should lie even below USD 1,800 per ounce. However, there are other factors such as inflation, war, and bearish markets. We see the reason for the still considerably strong gold price in these circumstances. And we believe that it will even increase further once we see a turnaround in the U.S. dollar strength, back to a more reasonable level. Accordingly, we believe that a healthy exposure to precious metals should be part of your portfolio.

How to position yourself

Having a look at the DXY, the currency that suffered the most so far is the Japanese yen. The Japanese yen traded at levels that have not been seen for many years. But also the Swiss franc lost over 8 percent year to date against the U.S. dollar. While this is hurtful for our clients who already were diversified outside of the U.S. dollar, we are confident that this is not lasting. As mentioned above, we have seen such spikes in 2018 and 2020 but always saw the U.S. dollar moving back into weaker territory. One might say that the current situation is another one since the Fed raises interest rates. While this is true, we believe that due to the fact, that other central banks will also start to raise interest rates, this gap will narrow again. Additionally, we see a reason to believe that – should the U.S. dollar strength be more permanent than expected – governments of other countries will intervene. For the Swiss National Bank, the current situation might offer a window of opportunity to reduce its holdings of foreign currencies like the U.S. dollar.

We believe that a turnaround must be indicated by some authority or an agreement like the Plaza Accord. We keep our eyes open to see whether there are central banks who are willing to sell part of their U.S. dollar holdings or economies that come to an agreement to participate in a plan to weaken the U.S. dollar to make U.S. goods more affordable again.

Because one thing is clear, a further increasing trade deficit is not in America’s interest.