We hope you had a wonderful start to 2023! The beginning of a new year is always a great opportunity to look ahead and share our assessment of what to expect in the next twelve months. Before we do that, however, we would like to look back with a quick look at the charts that we found most relevant in 2022.

It is important for us to point out that while there have been many surprises throughout the last year, overall our positioning held up. We expected increased volatility and higher interest rates and consequently have positioned our portfolios more defensively into more foreign currencies and value stocks already at the end of 2021.

We have expected precious metals and mining stocks to perform better, but we have still achieved an outperformance of the stock market and lost significantly less than the world’s indices, not to mention the ones in the U.S.

Now without further ado, let us have a look back at the economic charts of 2022 that were the most meaningful in our view:

Of course, in 2022 the name of the game was inflation. An explosive mix of a long-term expansionary cycle of the FED, as well as supply chain issues and then the war on Ukraine has led to inflation, as we have not seen in decades. While we have most likely seen inflation peak at the end of 2022, it is noteworthy that the U.S. has almost gotten to double-digit inflation earlier in the year. While many economies worldwide were struggling with the same issues, Switzerland was a notable exception with an inflation rate peak at a little over 3%.

The out-of-control inflation led to central banks having to significantly increase interest rates. We saw one of the steepest increases in interest rates ever, which led to a drop in fixed-income investments, as well as lower valuations for stocks. By the end of the year, the FED has increased interest rates seven times, with a current Federal Fund Rate of 4.25% to 4.5. Already in October, we saw that the FED rates were rising faster than at any other time in recent history. 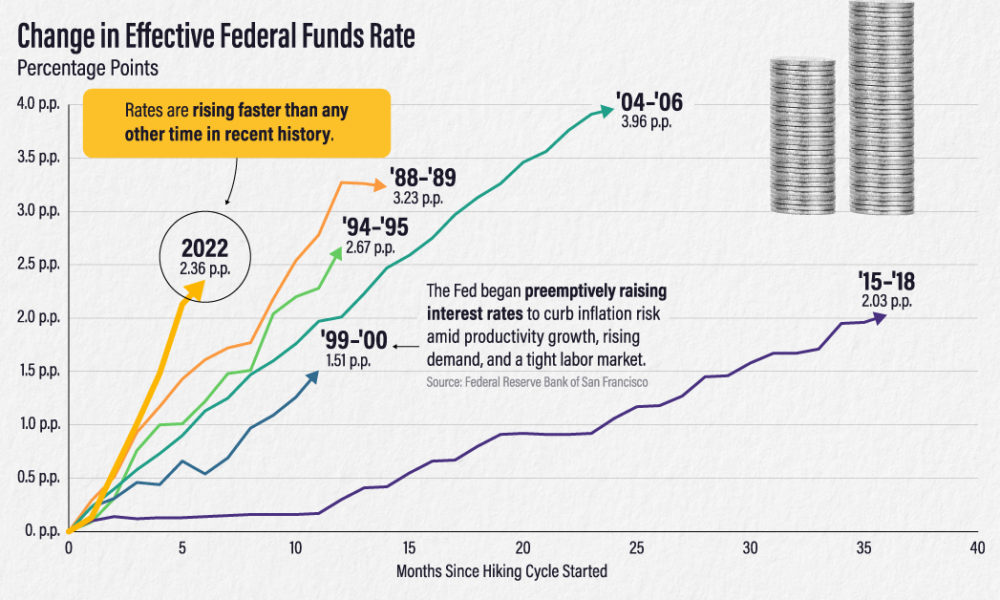 Because the FED was one of the first and one of the strongest central banks when it came to increasing rates, the U.S. dollar has gained significantly against most major currencies in the first three quarters of the year. On top of the interest rate situation, the U.S. dollar has also gained in value because a lot of people were seeking the currency as a safe haven during the turbulences we saw this year. This started turning around in late September when inflation rates started to come down slightly and people started expecting a turnaround in the FED’s policy at some point in 2023. 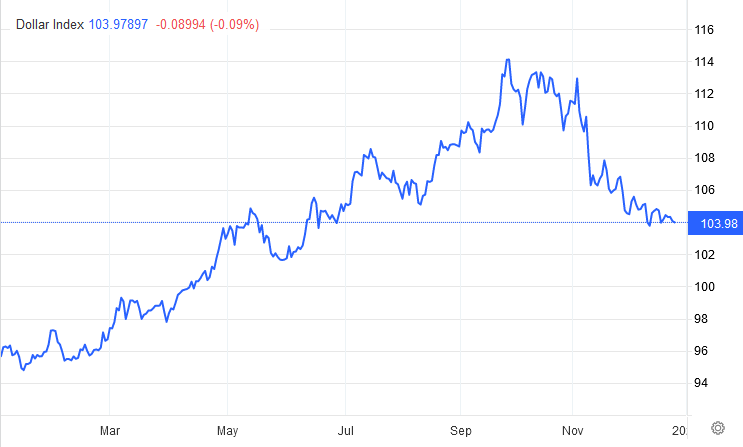 Last, but certainly not least, in July the yield curve inverted and stayed inverted for the first time since 2007 (there were short and shallow inversions in August 2019 and April 2022). An inverted yield curve means that interest rates on long-term bonds fall lower than those of short-term bonds. This is usually a sign of a coming recession – an inverted yield curve has emerged roughly a year before nearly all recessions since 1960. 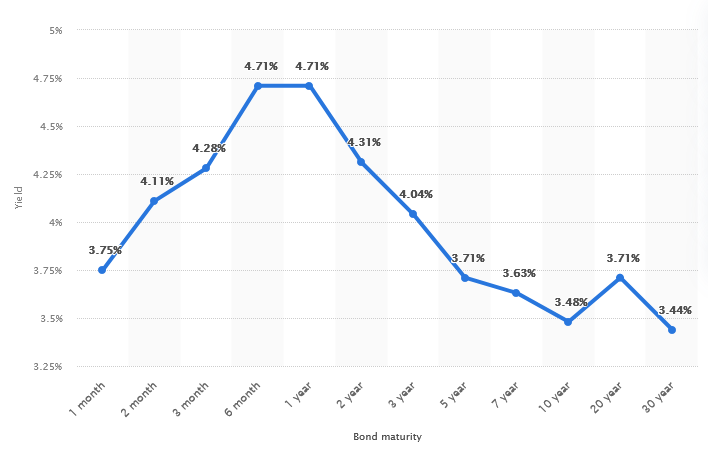 Looking ahead, investors are unsure about what to expect. Keep in mind that at the end of 2021, experts expected the S&P 500 to close 2022 around 4910. This would have been a plus of 7.5%. Instead, we find ourselves confronted with a loss of about 20%. This shows, on one hand, how difficult it is to anticipate the future and on the other hand the positivity bias many experts are suffering from. At WHVP we warned about the absurdity in the markets that followed the outbreak of the coronavirus early on. Consequently, we became cautious in our investment approach already back in 2021. While the experts’ expectations finally align with ours, we believe that once the majority turns negative, one should become attentive to not miss out on opportunities.

While 2022 was all about inflation and increasing interest rates, we believe that 2023 will become more about a lack of corporate profits, an end of private savings, and eventually a recession.

As we can see, corporate profits are turning downwards in absolute numbers despite this year’s inflation. One reason for this is that the personal saving rate has dropped dramatically. While it was not concerning at first due to the incomparable increase in 2020, we have reached a level where personal savings are even lower than what they have been in 2008 (here shown as a percentage of disposable personal income).

During the last 11 years, companies were spoiled with cheap money. This led to a high-risk tolerance that temporarily turned out just fine. However, the admittance of the central banks that the experienced inflation is not transitory and the increases in interest rates changed the picture. We believe that volatility will stay high during the first semester of 2023. Once it becomes official that major economies entered a recession, central banks will react to stabilize markets. It is our understanding that investors usually predict the economy’s development with an advance of about six months. Accordingly, we will position our portfolios in a way that we keep our cautious approach at first but will slowly re-enter the market. With an equity exposure of about 35 – 45 percent and a cash exposure of up to 30 percent, we find ourselves in a perfect position to do so.

When taking in new equity investments, we will focus strongly on the financial soundness of the companies we invest in. Since we expect inflation staying well above two percent during 2023 and 2024, we want to be invested in companies that either have the power to adjust their prices with the increasing input costs or that have a convincing growth rate due to a specialty that is hard to copy.

The focus does not lie on a short-term profit but to find the outperformers that will shine once the world economy has overcome the lunacy that was created during the past decade.

While in the past bonds were unattractive due to the ever-low interest rates and therefore low yields, bonds now have a hard time because of rising interest rates and the consequent pressure on their prices. However, we believe that central banks do not have what it takes to create a second Volcker era. Therefore, we are convinced that fixed-income investments should not be neglected. As we have shown in the past numerous times, there are multiple factors influencing our fixed-income investment decisions. I.e., with our investments in bonds, we do not only consider the yield but also the currency. Accordingly, in addition to the yield, we expect an appreciation of the investment caused by a strengthening of the chosen currency against our clients' base currency.

Furthermore, and this is something we cannot stress enough, we do not compromise on the quality for an additional return. When buying debt from a company we either take a company that has a very good credit rating or where we executed thorough due diligence and have faith that the company will be able to repay the outstanding debt. Looking ahead, the refinancing costs are very important. Often, companies repay existing bonds by issuing new bonds. Since the terms for new debt were very fortunate in the past, times changed and we do not expect that we will see interest rates as low as in the last decades. Therefore, do not underestimate bonds, also considering that in case of bankruptcy you are better off than a shareholder is.

The Swiss franc was relatively shielded from high inflation over the twelve months. One reason for this is a circular, self-fulfilling prophesy: There is the expectation that the currency, driven by fundamentals, will tend to appreciate and thus dampen inflation. And since the Swiss franc has been appreciating against the US dollar since 1850, the expectation is for that extrapolation to continue.

This chart shows the inverted consumer price index for the Eurozone, Switzerland, and the U.S., from January 2019 until November 2022. It shows the erosion in domestic purchasing power for the currencies. The Swiss franc lost less purchasing power than the other two, which means it should appreciate against both. 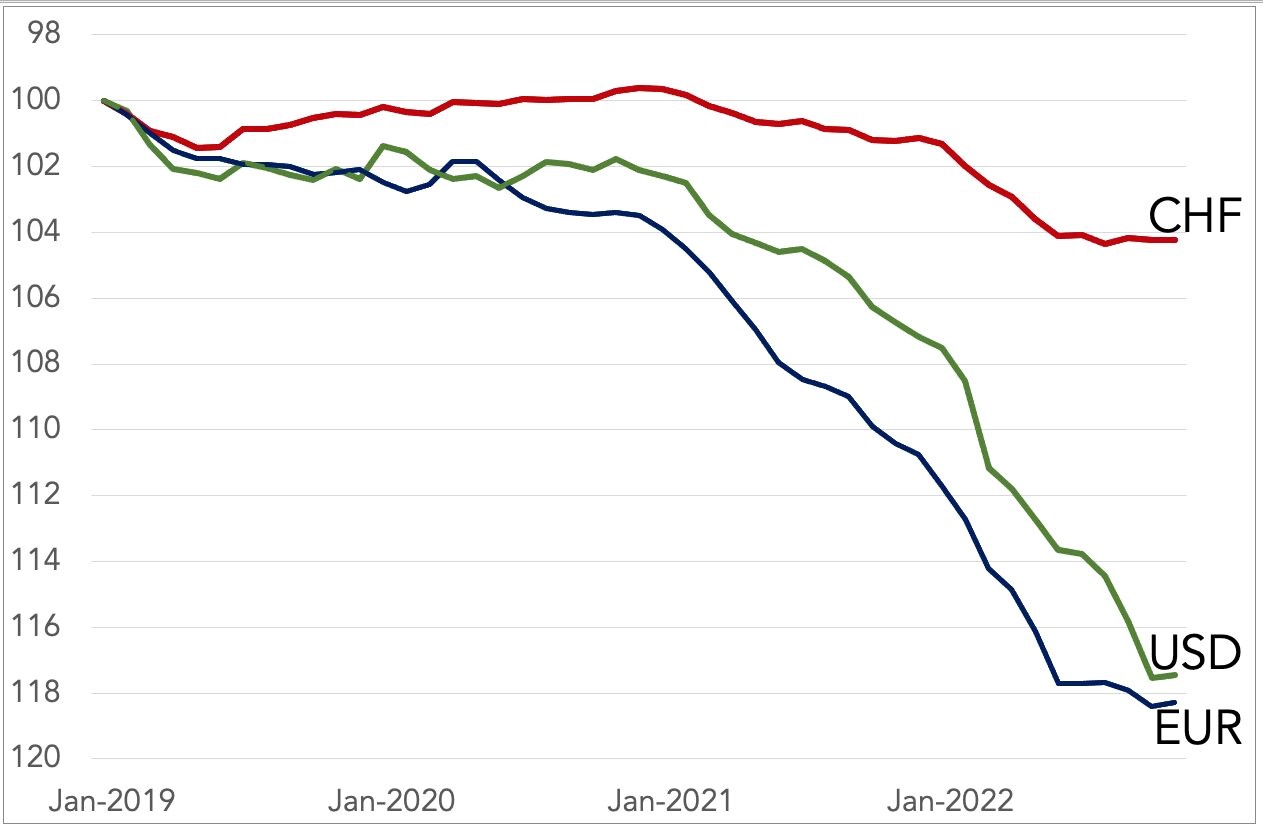 Keeping in mind the current global situation that is characterized by bottlenecks, and a lack of energy and resources, we believe that countries that are strong in fossil fuels and the mining of important resources for the energy transition will be favorable. This could be the Australian dollar or the Norwegian krona.

Just recently, the Bank of Japan (BoJ) showed the first signs of moving away from its ultra-loose monetary policy. This caused a rebound in the JPY against the USD. After the JPY was down about 24% against the USD in October it could regain some of its losses, but stills ended the year around minus 14%. The latest move of the BoJ combined with the expectation that Hiroshi Nakaso could become the next BoJ governor gives back hope that the JPY could move back to a level of more than 110 JPY/USD (year-end 2022: 133 JPY/USD).

Let me share some words about cryptocurrencies too. As one of the worst-performing sectors, crypto did not hold its promise. It was glorified as an alternative to gold and as a hedge against the markets. While gold ended the year, where it started, and markets were down about 20 to 30 percent, cryptocurrencies managed to lose up to 100% during 2022.

That does not mean that cryptocurrencies have no right to exist or that there is no investment case but it shows the unpredictable volatility and risks it bears. We do not exclude the chance that this might be a dot.com moment and that in the long run there are cryptocurrencies that will bring value. However, it is important to keep in mind that for now, crypto does not seem to work particularly well as a store of value or an alternative to gold.

As our loyal readers already know, we have been bullish on precious metals for quite some time now. With the gold price ending the year flat, the silver price being slightly positive, and the platinum price being up about 6%, precious metals outperformed S&P 500 by about 20%. However, the journey during the year was everything but joyful. While it started on good terms and shoot up considerably, we have experienced quite some headwinds in between. The main reason for this challenging year was the rising interest rates and the strong U.S. dollar. While interest rates are still on the rise and the U.S. dollar is still considerably strong, precious metals once again proved to be a hedge against inflation and global insecurity.

We are convinced that keeping in mind our expectation for a recession in 2023 plus central banks taking their foot off the gas, it will be a perfect environment for precious metals to perform. Accordingly, we keep our bullish outlook on precious metals but do also take into consideration that once volatility peaks, precious metals might not have the same potential anymore. Therefore, we see precious metals as a strategic positioning that we are willing to reduce at a certain point.

Other than precious metals, the case was not as good with mining shares. They have suffered much more than precious metals and stayed in line with the equity markets. Although some of them recovered towards the year-end, there is still some way to go. What keeps us bullish on mining shares, for now, is that prices are nowhere near where they were back in 2020, when precious metals were even lower than they are today. However, same as above, we believe that next year will bring us an economical catharsis, which will give us the opportunity to liquidate our miners at favorable prices and move the proceeds into more promising, long-term-oriented investments.