Managing the markets has not been easy in the last two and a half years. Who would have thought that after a global lockdown markets would immediately start a new rally bringing them to all-time highs? It was clear to us that this rally could not be sustainable. When the markets started to tumble this year, many financial advisors started shouting that now is the time to “buy the dip”. If you had followed their strategy, it would not have ended well so far.

Here we are now with inflation rates that are the highest they have been in 40 years and central banks desperately trying to get the situation under control by increasing interest rates. As if that would not already be threatening enough, the NATO (North Atlantic Treaty Organization) decided to accept Finland and Sweden as new members and to declare Russia as their most direct threat, their enemy. From a Swiss perspective, we are currently more than happy not to be a part of either NATO or the European Union. Our independence and neutrality give the Swiss government the chance to act on its own without having to follow everything NATO does. Additionally, it leaves Switzerland once again as a potential mediator in this war.

Dogs bite whoever is slowest

While central banks took the impacts of the coronavirus lockdowns very seriously, they somehow missed applying the same attention and seriousness to rising inflation rates. Accordingly, most central banks waited for a long time until they eventually started to react. Since the beginning of this year, many of them finally started to raise interest rates. However, as can be seen in the chart below, in many cases inflation hit 6% or more already and it is unsure whether it will come down again soon.

Governments have already started to indirectly support their people by foregoing some taxes on energy and subsidies in other places. Therefore, keeping the same calculation for inflation will lower the figure on paper but that will be misleading. Additionally, the chart below shows how real interest rates (interest rate minus inflation rate) are still well below zero. There are two banks (the European Central Bank and the Bank of Japan) that have not raised interest rates yet. This led to a situation, where the currencies of these regions lost quite a bit of their value against others, in particular against the USD. 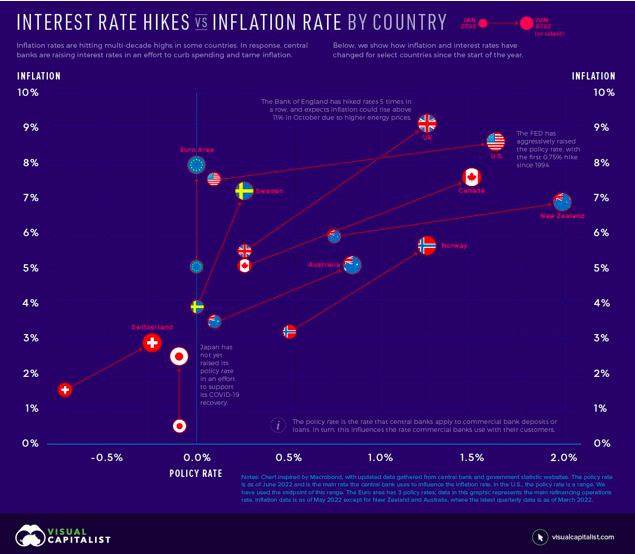 However, should these two central banks eventually decide to raise their interest rates too, that should lead to a regaining of strength for these currencies. We could observe this with the Swiss franc which lost about 9.5% against the USD during the first semester. Once the Swiss National Bank decided to raise interest rates by 0.5% to -0.25% (inflation is currently at 2.9%), the Swiss franc regained about 4% of its strength against the USD.

While there are different things to consider for central banks we believe that in particular the European Central Bank and the Bank of Japan should not wait too long to increase their interest rates too. In the USA, we expect another raise of 0.75% in July but also a still high inflation rate. Whether this will be sufficient to fight inflation effectively is questionable. The real problem for central banks is the lagged impact of their actions. This again implies the risk of an overreaction that most likely will lead to a recession.

The evaluation of the stock markets change

Pitching a good story is not enough anymore. Since investors, due to the rising interest rates, can expect increasing returns on so-called “risk-free assets”, they stepped up their requirements for investment opportunities. Additionally, central banks reduced or stopped their purchasing programs, buying stocks and bonds at the open market as they did in the past. Consequently, there is less liquidity in the markets, which leads to higher volatility. Because money is not free anymore, companies actually have to generate value not only for the equity investors but also in order to pay for their debt. The valuations of the stock markets in the last two years moved to levels that have not been rational any more. We mentioned this a couple of times (particularly mentioning the Buffett indicator here) and refused to throw our clients’ money blindly into the markets just because they seemed to go only in one direction. In 2021, this led to a situation, where our clients did not see the same returns as they had if they would have invested full steam ahead. On the other hand, this approach saved our clients from losses of 20% and more this year. Accordingly, we believe that especially right now, following an active investment approach is key. We do have reason to believe that the bear market we entered is going to stay for some more time. While this can be very frustrating, it is of utmost importance to not lose patience and become emotional. When looking at the famous P/E ratio, which is used to figure out whether a company or an index is over-or undervalued, we see that taking into consideration the most recent drop, markets overall are still not cheap. Additionally, we see a lot of emotion in the markets due to insecurity about what the future will bring. Therefore, we believe that volatility will stay high.

However, while markets fall, there will be opportunities arising on the horizon. Once this is the case, it needs a lot of courage to make use of them. Since the prices can move even lower after taking advantage of such an opportunity, it will take patience and faith from our clients towards us while navigating through this storm. Since we are not traders but long-term investors, always keep in mind the investment horizon.

There is a credit risk

Long-term oriented fixed-income investors had a hard time during the last 12 years. While equity markets rose continuously, the coupons on bonds shrank away. Due to ultra-low interest rates, high-quality investment-grade company debt, as well as government debt, was rarely available with a reasonable return. While many investors decided to forgo quality for return that was nothing we were willing to do (see here). Accordingly, we faced the challenge of finding bonds that provide a return so that it makes sense in regards to the price structure that comes with working with a European private bank. However, as was never the case before, bonds suffered along with equity markets quite badly this year. This was mainly due to the high inflation and the rising interest rates, where the investors’ expectations are further interest rate increases during this and next year. While higher refinancing costs might be an issue for low-quality bond investors that have a short time horizon, it is not for us. This environment allows us an investment opportunity to find high-quality bonds that pay a decent coupon and are trading at attractive levels.

The interest rate’s impact on currencies

When a central bank increases interest rates, its currency usually becomes more attractive to investors. Obviously, other aspects do influence the value of a currency too. Due to the war in Ukraine, the disturbed energy prices, and the ongoing supply chain issues, the world still finds itself in an extraordinary situation. As we could observe in March 2020 and in previous exceptional circumstances, the USD gained quite some strength due to worldwide insecurity. This time, this insecurity in the markets is paired with the Fed increasing interest rates faster than other central banks do. However, while this has an effect on the currency, we believe that in the longer term, once investors get used to the environment and the situation calms down, the USD will weaken. Additionally, other central banks will eventually raise interest rates too, which will weaken the effect of the interest rate difference.

Precious metals are missing their glance

While gold was able to keep its value this year, we had expected that gold would trade at higher levels by now. Once Russia invaded Ukraine, gold rallied up to about USD 2’070 per ounce. We were convinced that this is not a sustainable movement and therefore decided in some cases to reduce gold positions. While this turned out to be the right call, gold still trading around USD 1,800 an ounce is not something we expected. While rising interest rates generally are bad for precious metals, the fact that real interest rates are still negative due to high inflation should move the demand for gold higher. Additionally, the rising expectation of a recession should be a further driver for precious metals. Nevertheless, we believe that patience will pay off as it usually does. When markets crashed previously, precious metals were usually affected too. However, gold and silver were also the assets that recovered quickly afterward. The pressure was often due to margin calls where speculative investors had to sell their precious metals to generate enough liquidity to meet their obligation.

Therefore, we believe that having a certain portion of your portfolio in precious metals and precious metals-related investments will eventually pay off and will help the portfolio to recover more quickly as would be the case otherwise. However, in the meantime, it will require some patience and strong nerves.

The decisions are made, so commodities we need

Governments around the world decided in an environment of rising markets and unlimited money that they can do and finance whatever they want. This assumption was made under the modern monetary theory, which states that if a country has its own currency it can print money to finance its growth. In this trace of invincibility, huge infrastructure programs have been launched. Nowadays, pulling back on these would send a sign of weakness and loss that no politician wants to admit. While commodity prices are skyrocketing, this means that the increased demand from the governmental infrastructure programs will add additional pressure on shortages. This is typical demand-pull inflation, where the government exacerbates the inflation issue.

Accordingly, many experts state that even though commodities have increased in prices a lot already that we find ourselves still at the beginning of a commodities super-cycle.

As we mentioned cryptocurrencies in the past, I did not want to miss the opportunity to give you a brief update on cryptocurrencies. In the past, there were experts stating that in particular, Bitcoin is the digital gold. As we can clearly see, this claim did not hold up. However, it is our understanding that cryptocurrencies established themselves as an accepted asset class that most probably will not go away. Nevertheless, that does not mean that anyone has to include it in their portfolio. There are over 19,000 different cryptocurrencies and I believe that we are fair if we say that more than 95% of the existent cryptocurrencies can be considered fraud.

Accordingly, we believe that for many investors, cryptocurrencies were used as an interim solution while cash was unattractive and bonds did not provide any returns. Since this is changing and due to the turmoil in the crypto industries with stablecoins that could not hold up their promise and margin calls that were not settled, this asset class stays highly speculative. As long as the cryptocurrency market is not clearly regulated, this will probably not change. 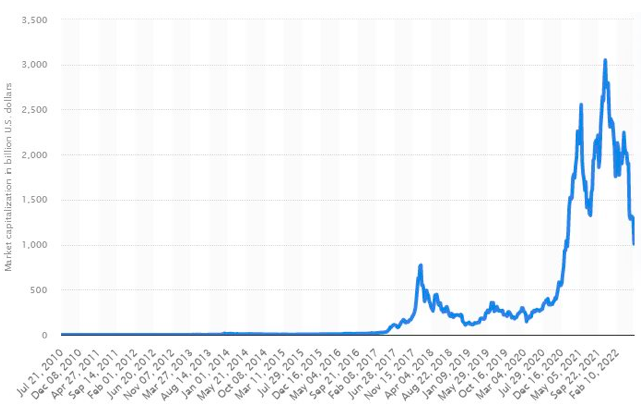 Opportunities on the horizon

Even though an environment with rising interest rates and high inflation is difficult to navigate through, we are convinced that opportunities will arise. We at WHVP see the current environment as a healthy development. The last two years were as if the global economy had a fever. With the broad raise of market indices around the world, many unhealthy, unsustainably led companies rose in value too. Now, the temperature is cooling down again and evaluations return to more healthy levels. This phase of purification will be accompanied by overreactions that will lead to high volatility. We feel comfortable using this environment to take a stake in investment opportunities that have a record of accomplishment in generating value for their shareholders. In order words, we believe that value investing will start to pay out again.