First and foremost, I want to wish you and your loved ones a very Happy New Year!  If we learned one thing in the past two years, it is to be grateful for what we have because we do not know how long the nice things last. 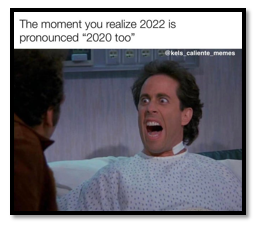 Let us hope that other than what the meme indicates, 2022 will be nothing like 2020.  Keeping our focus on the financial environment, there were different surprises that might have brought up doubts about how markets work. While it is important to stay open-minded to new developments, the environment we have lived through during the pandemic is everything else than representative of how markets usually work. Thinking back to pre-coronavirus, discussions about helicopter money were more of a theoretical construct. Now, however, governments sending out cash to the people, covering losses that usually are borne by banks and insurance companies, and governments working hand in hand with central banks have become normal.

The Year of Inconsistencies

When speaking with financial advisors, contacts at the banks, and other experts in our field, one thing that comes up regularly, is that we find ourselves in an environment that challenges investors in a way that has rarely been the case before. It seems that almost nothing is predictable anymore. However, the key is to not get too distracted by short-term inconsistencies. Contrary, having a long-term approach and making adjustments when necessary is crucial for being successful.

In 2021, we saw ongoing issues in global supply chains that were intensified by the accident of the container ship Ever Given that blocked the Suez Canal back in March. Additionally, even though container ships made it to their destination, they were hindered to dock since the ports did not have the capacities required to bring all the containers onshore. However, there was not only a lack of products and resources but also of employees. Consequently, we could observe a rise in inflation, as we have not seen in the last 30 years. While central banks tried to convince us that inflation is temporary, they eventually had to give in and admit that it is more consistent development. In the meantime, we see employees quitting their jobs due to the ongoing back and forth when it comes to the virus and the restrictions. According to the Federal Reserve Bank of Atlanta, there are increases in salaries by 3.8% for employees in general. However, the expected increase in salary when changing the employer is about 5.2%. This fact leads to the question, whether there will be a wage-price spiral picking up in 2022.

Looking into 2022, the crucial question is, what are the main impacts and how will they influence the global economy. While we have focused on developments from a financial standpoint, there are other risks too. While the war in Afghanistan is officially ended, there are still hot spots that have the potential to have an impact on our western society. As bad as it sounds, the war in Afghanistan over the last 20 years did not concern western society very much. The reason from our perspective is that conflicts and tensions usually are a shock in the beginning, but societies and economies eventually realign. Therefore, a military invasion from China into Taiwan would have quite a severe impact on Europe and the U.S. Eventually, the western governments would have to insert restrictions if not interfere to not lose their credibility completely. If they do interfere, the chance of a trade war becomes present again. In a less severe situation, China punished Lithuania with an import ban because they allowed the government of Taiwan to open an office for its representation in Vilnius. Furthermore, there is tension from Russia as they have been moving their troops to the Ukrainian border. While neither the European countries nor the U.S. like this provocation, there has not been too much happening so far. Should Mr. Putin eventually decide to invade, god knows how the western countries would react. Since there is a lot of natural gas coming from Russia, eventually there is not too much wiggle room for sanctions or the likes. Accordingly, there is a lot of back and forth when it comes to the decision of whether the gas pipeline Nord Stream 2 should be confirmed.

Stock Selection is Key in 2022

Equity indices broadly rose during 2021 again. To be honest with you, we were suspicious about the ongoing recovery in 2021. Accordingly, we kept some investments in mining shares that served us perfectly as a hedge in 2020. While these investments in mining companies affected our performance negatively in 2021, the decision to hold on to our conservative value investments turned out to be more successful. Our focus on stable, long-term oriented, and well-financed companies has been the right decision in terms of the inflationary environment. In 2022, we will keep this focus. While eventually, central banks started to react to the inflation, the companies that will suffer the most will be the so-called growth stocks. Often, these companies show a poor balance sheet with high levels of debt but are highly valued due to the low-interest rates and the high potential they bear. However, once stimulus programs end, the next logical step will be an increase in interest rates. As mentioned before, some central banks as for example the Bank of England already raised interest rates in December. Russia’s central bank even raised interest rates seven times during 2021, bringing it back to 8.5%. The difference in reaction between developed economies and emerging markets is substantial. However, more on that later (see the chapter: central banks stand with their backs to the wall). 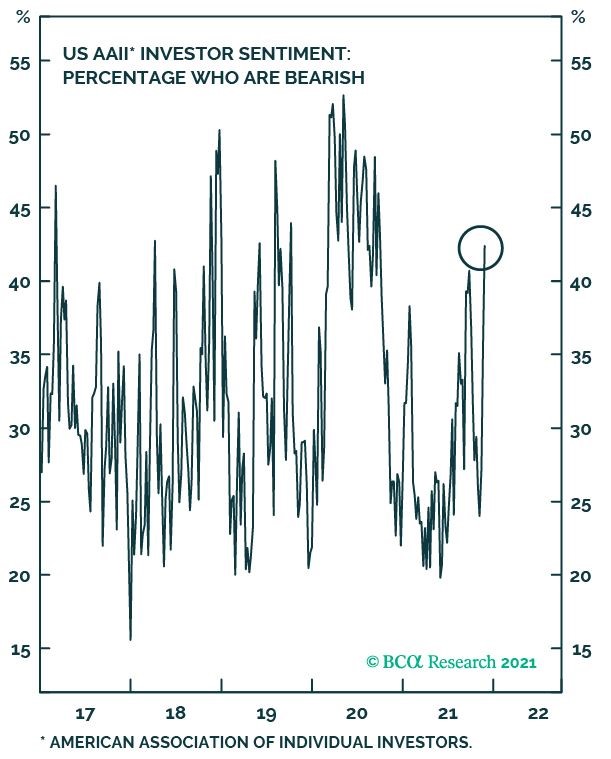 In times of rising prices, it is of utmost importance that companies are able to pass on the rising costs of production. Expensive resources or employees that demand higher salaries cause pressure on the margins. Another reason, why we prefer value stocks to growth stocks is that companies representing value stocks tend to have the ability to invest further while growth companies have to make sure they do not fall into illiquidity. While businesses dealt with lockdowns first and a lack of employees later, now it becomes important to use the accumulated knowledge to expand and make the business more efficient. That does include anticipatory investments to protect the supply chain. Considering the specific environment of high inflation but still low-interest rates combined with probably more restrictive central banks, we expect a bumpy year ahead. Furthermore, the percentage of investors who are bearish is currently increasing (see chart). Accordingly, even if our investments in mining companies did not payout last year, we see the reason to believe that there will be corrections caused by central banks where they have the chance to shine again. Having said that, we will not be afraid of using such opportunities to reduce our exposure in the precious metals mining industry and realize some gains, as we already did in August 2020. Until we get there, we are happy to collect the dividends these companies pay on the way.

Central Banks Stand with their Backs to the Wall

Investors were concerned about rising inflation since the financial crisis. Now, inflation is a reality and central banks are not prepared. Money was too cheap for too long. 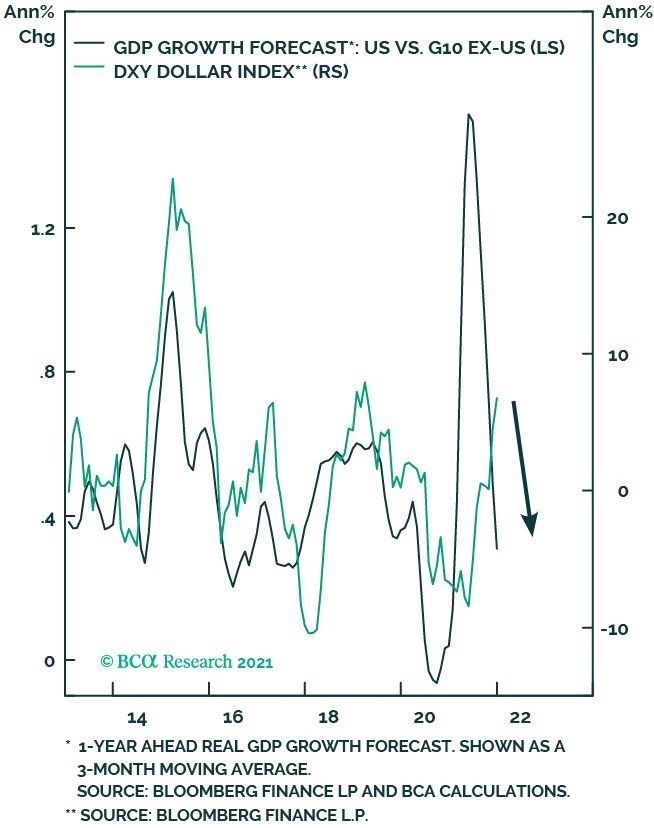 Central banks could ignore it because it did not affect the people directly. It was about financing growth that led to rising stock prices in particular over the last twelve years. To be fair, central banks slowly start to react. Accordingly, the Federal Reserve is planning to end its stimulus spending by March and undertake three interest rate hikes during 2022. We are skeptical, whether there will really be three hikes. The European Central Bank did also agree to end their pandemic emergency bond-buying program (PEPP), but at the same time informed that they will increase the pre-pandemic asset purchase program (APP). Raising interest rates is very unlikely in 2022 according to ECB president Christine Lagarde. The Swiss National Bank itself will not really have the chance to raise interest rates as long as the ECB does not. However, other than the European Union, Swiss inflation still lies well below 2%.

Considering the turnaround of the Fed and the potential three interest rate hikes combined with the high valuation of the U.S. market, the potential for further gains is limited. Accordingly, researchers expect a shift of investments from U.S. markets into the rest of the world. This will likely come with a devaluation of the U.S. dollar since money flows into other currencies (see chart). 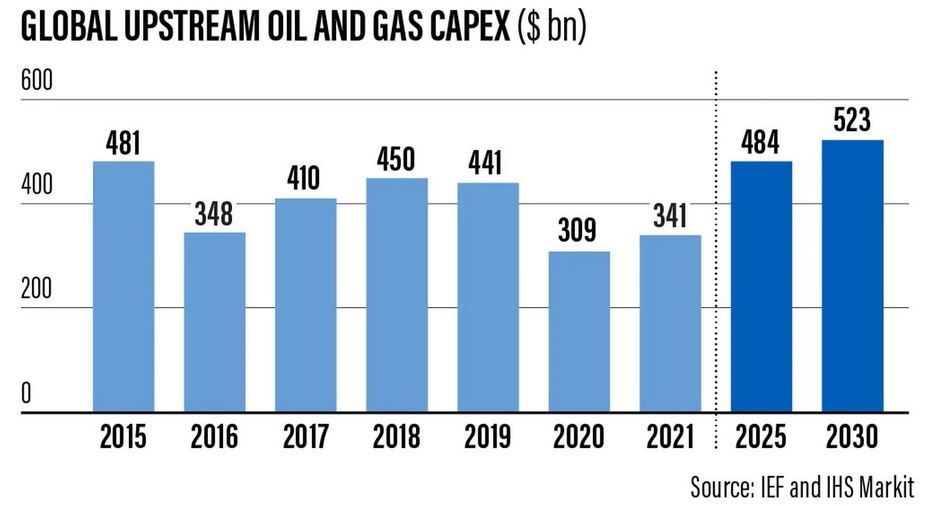 Hereby, the question remains which currencies should be preferred. Taking into consideration the underinvestment in energy during the last years the probability of higher oil prices increased. The total investment in the oil and gas sector lies 23% below the pre-coronavirus levels (see chart). This is a problem since the demand for energy sources in the hydrocarbon sector is still rising. On the other hand, new sustainable energy sources are not developed far enough so “dirty” energy is still needed. Additionally, the demand for metals like copper, zinc, aluminum, nickel, cobalt, and platinum, in demand to realize sustainable energy sources is huge. Accordingly, countries that have natural resources can benefit. We see the Australian dollar and the Canadian dollar as the winning currencies of the developed countries.

As mentioned above, emerging markets’ central banks were proactive in regard to the increase of the consumer price index with interest rates hikes. Expecting the reopening plays to gain the upper hand over pandemic plays in 2022, there is a fair chance that emerging market currencies could regain some strength against the U.S. dollar too.

Comparing precious metals prices to equity indices in 2021 is quite frustrating. That can lead to one or the other questioning the plausibility of precious metals in the asset allocation. However, as always, it is a question of the time horizon. While the accurate exposure to precious metals should be aligned to the specific global situation, we are firm believers that precious metals in general, and gold in particular, should usually be part of your asset allocation. Having in mind the high inflation and the more restrictive monetary policy going forward, there are specific risks that jeopardize the equity markets moving forward. Accordingly, we feel comfortable holding on to precious metals for the time being as is the case with mining company investments. However, we believe that the time will come, where the current market excesses correct. This will give us the opportunity to eventually lower our exposure to precious metals and use the freed resources to take on other opportunities.